Last night hubby and I dropped off the first three of the litter for their neuter surgeries - the biggest of the boys as chance would have it, Finn, Ollie & Abner. Imagine my surprise when the vet announced that Ollie is actually a she! I quickly reverted back to the original name we had picked out for this tabby since initially for some reason I suspected it was a she, but I squashed those thoughts when she began growing rapidly and her eating pace was keeping up with that of her brothers (you know those ferocious appetites that males seem to have - both animal and human alike!) :))

So Ollie has gone back to being Honey, so sorry little girl about that mixup. The other thing that should have tipped me off to her sex was the fact that during the course of last night's ride, she cried her little heart out whereas her two brothers laid down in the carrier and were content to enjoy the air conditioning. *L* 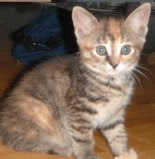 Posted by Safe Haven Hotel at 9:14 AM