I've recently started volunteering one afternoon a week at the local Petsmart where our rescue houses some of our younger rescues..........

So far it's been so rewarding and I'm thoroughly enjoying spending afew hours with some really sweet kittens! It's there that I've met Fantasia. Approximately 1 year of age, she has already had two litters (if you can believe it), and came to the attention of our rescue, when a colony caretaker actually witnessed her being thrown by someone from a car. As if that wasn't horrific enough, she was pregnant at the time.

Well, her kittens have all been adopted into their forever homes and I understand that Fantasia was an amazing Mommy the entire time they were with her. She's been moved to the pet store due to lack of foster space, and although she is physically a gorgeous torti girl, the emotional side of things has been alot more stressful for her. I shudder to think of the horrors she has suffered before coming to us, but her cringing when you try to pet her, her incessant need to hide under the cages instead of sitting out in the open, and her constant shrinking away whenever a hand or movement is close by, pretty much tell the story.

I want so desperately to pet her and reassure her that everything will be alright now - that noone is going to hurt her; but it's very slow going at the moment and so I'm trying baby steps in talking softly, and reaching out everso gently (when she'll let me), to stroke her head. The babies at this centre have free reign in the room once the store opens until it closes again in the evenings - there is an army of volunteers who ensure that they do not have to be caged throughout the day and early evening; and yet when it is time to put everyone to bed for the night, I usually end up having to handle Fantasia like her own Mommy would have just to keep her from scratching or biting me.

Anyway, there are so many things about her that remind me of Flossy. She's had some horrible things happen to her, now I'm hoping that we can heal those demons and help her to trust again. I for one, believe in miracles and I can't wait to see this one take shape. 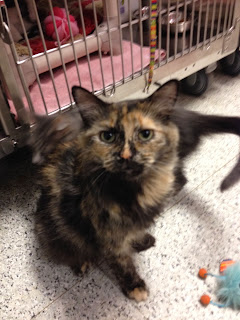 The adoption enquiry count for Garfield now stands at 6. The last one of which was yesterday afternoon, I spoke to a woman who sounded like a perfect fit for our creamsicle boy. Someone with a great deal of experience dealing with big cats, currently has a 17 Ib boy at home, and has had cats her entire adult life. She and her husband weren't fazed by Garfield's size at all (hooray!), and were anxious to come out and meet him. 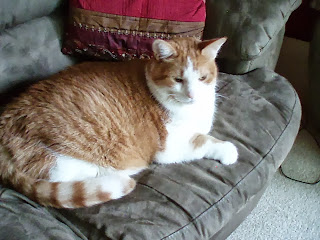 Unfortunately however, not an hour after I had spent 40 minutes on the phone with her, she called back to say that in further discussion with her husband, they had come to the conclusion that Garfield wasn't the right fit because he wouldn't be allowed to free feed all day and their current cat did - they didn't want to upset the house.

I was sorely disappointed and yes I'll admit it, somewhat annoyed.

Regardless I went off to my volunteer work feeling let down and was sharing the story with another rescue volunteer who reminded me that Garfield's six adoption enquiry calls were nothing short of AMAZING! - most kitties get one or two max!!!

The more I thought about it, the more I realized how right she was. There wasn't anything to be discouraged about! Garfield was generating lots of interest which is a great thing in and of itself and it just means that he's that much closer to getting his forever home.

So glad that I had "N" there to remind me of that and to help me refocus on the glass half full; not half empty. :))
Posted by Safe Haven Hotel at 3:42 PM 2 comments:

Anyone who knows us or who has had the pleasure of meeting our Stinkerboy (or Rocky Rockstar as he's affectionately known at home), knows just what a special litte guy he is. Small, suffering from hypdisplasia (wobbly kitty syndrome), and then diagnosed with epilepsy approximately 5 years ago; Rocky is a tough nut if ever there was one. He may be little and not so steady on his feet, but he sounds like a 200 Ib male lion on the other side of a door when he's not happy, and he struts around this house like the alpha male that he is.

We originally fostered him after he was rescued from a high kill shelter outside the city. We were actually foster home #2, he didn't last in #1, as he bit his new found foster Dad within hours of making his acquaintance. Some might say that the first foster home just wasn't the right fit for our little wiry guy, but truth be told, he does have a hair trigger temper and will just as quickly growl, hiss and spit, as he will relax long enough to let you love him.

Rocky is a strong, dominant, jealous, and fiercely protective boy who not only scares the whiskers off of every foster who enters our home, but who also despite his issues, demands and commands the respect of every feline and human that he crosses paths with. He doesn't give in easily and he's no pushover - tuna, temptations treats, and chicken may be some of his favourites, but if he doesn't like you and even more importantly doesn't trust you, than you can just quit while your ahead because he's not coming or relenting until he's good and ready.

He's been with us now about 8-9 years. He didn't even purr for the first 3 years that we had him, and even to this day, if he's upset or feeling vulnerable about something, he lets you know straight away that "now is not a good time" - and you'd better respect that or prepare.

That's why seeing him in moments like the one below, just bring tears to my eyes. He has a bond with my husband that is the most gentle, loving, and trusting that I've ever seen between an animal and a person. Rocky loves him and he loves Rocky, and every morning right after I call my husband to get up for work, Rocky makes his way over and they have their cuddle time. It's in those few minutes together, that you can see that Rocky like alot of abused and abandoned animals who continue to have their demons, deep down just wants to be loved.

We've never regretted bringing him into our family and he is a perfect example of what love can do. 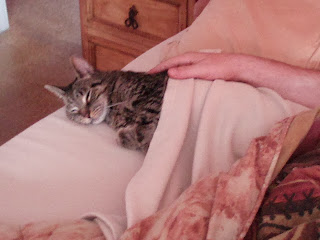 So far we've had 4 adoption calls for Garfield, but unfortunately noone has been the right fit for him as of yet. I did meet one very nice man via this avenue and it was a good visit and a pleasant way to spend half an hour or so, chatting about all things related to cats; but in the end it was decided that Garfield wouldn't be going home with him.

I had to laugh at our creamsicle boy the other day. Often when it's meal times, he does tend to finish his dish first and it would appear that he seems to think that if he stretches himself out vertically as long as he can, I might somehow not be able to see him and thus, he can sneak in and eat the rest of Rocky's helping of breakfast or dinner before I've had a chance to take the dish back up off the floor! 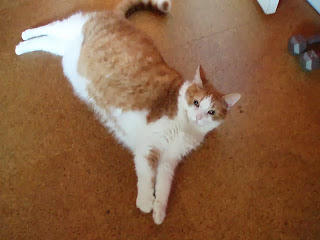 When I first found him like this, he actually had his head pressed so closely to the floor as if to say - you can't see me. *L* 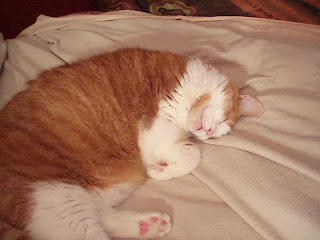 Garfield is doing great! His previous tummy issues are completely under control and he appears, happy, settled and totally at ease so it's safe to say that the adjustment period is over and it's all systems go from here.

The one other thing that let's me know we're well on our way is that I've already had two adoption calls for our creamsicle boy. Alot of people would tell you that doing rescue work isn't for the faint of heart, and that's true. But what's more true is that a leopard always shows his spots sooner or later and this thankfully is always sooner I've found when it comes to that initial conversation after an adoption enquiry has been made.

Case in point...... The first individual I spoke with a week and a half or so ago, who called really eager to meet Garfield, had lost their own cat a year before and wanted to go through the grieving process - fair enough. I can totally relate to feelings of loss and understand that we're all different and everyone needs their own amount of time to feel that they have healed. But in the year that their cat had been gone, they had been to 6 shelters, 4 adoptathons, and had already had conversations with 3 different rescues about 8 other cats - with none of these ending in an adoption. My first alarm bell had already gone off. My second alarm bell went off after we continued our conversation for afew more minutes and I let this person know that Garfield weighs in at 22 Ibs.

It became very apparent, very quickly, that they were already backing as far away as possible. The clincher? - well that was when they asked me how I hoped to possibly guarantee his health when he was already so unhealthy at that (and I quote), HUGE size? There's a deal breaker in me with everyone I meet in life - I don't like people that make fun of other people because of their weight, their skin colour, or their religion, and the same holds true for anyone that references an animal by using terms such as IT, THING, UGLY or FAT!!

The second interested party had a dog and was hoping that I could confirm Garfield's past history included friends of the canine persuasion - which of course I cannot.

It mystifies me why Garfield's weight is an issue for people. When we fostered Farley (who was of a similar stature), everyone that called prior to his adoption, actually admitted their disgust that he was so heavy. My question to them was and is still the same..............how can you penalize an animal for what has clearly been a case of animal neglect/cruelty/abuse? It's not as if he or any other in his situation has willingly trotted downstairs and opened the pantry cupboard or fridge on their own and decided to gorge to the point of obesity!

What's most important here? That Garfield is safe and sound with us and has advocates in the form of the rescue and us his foster family, who will ensure his new forever family will love him for the darling, sweet animal that he is AND recognize his extra bit of self as just more of him to love.