This past week we've had a potential adopter interested in Farley, ask me point blank if I could guarantee that he would absolutely get along with their current resident cat. This wasn't just someone asking me what I thought the chances of them actually liking one another were, this was someone wanting me to state unequivocally that I could GUARANTEE that Farley and their cat would not just learn to tolerate one another, but that they would become close; ie: snuggle, play together, groom each other, and want to sleep together.

I'm stating right now for the record that I absolutely hate the word guarantee - especially when a potential adopter uses it multiple times in a sentence like others of us will say "uh huh" during the course of a conversation.

Initially I tried to explain (in detail I might add), that Farley and ***** may very well get along swimmingly given ample amount of time to become used to another and determine who will be the dominant kitty, but that just didn't appease this person. When I explained that in our numerous years of fostering we have yet to have a serious war break out among our two boys and the resident foster (whoever that be at the time), and that eventually they always "work things out" - that didn't seem to do any good. When I tried to say that Farley and their cat might not end up loving each other but that I was confidant over time they could cohabitate peacefully together, that also didn't seem to register. No, this person wanted an absolute guarantee from me personally as Farley's foster Mom, as a representative of the rescue, as (in their words) an experienced rescue person who is "doing this for a living".
Okay so as gently as I could and with patience wearing thin, I did explain that my husband and I were not doing anything rescue related for a living, but that everyone within our rescue (and all others) are volunteers, meaning we're all working for free to help these cats. This too I'm afraid fell on deaf ears - as if there was a very loud radio on in the room this person was sitting in, and no amount of trying to talk over it on my part was going to permeate.

In the end I stated point blank that the only thing I could GUARANTEE was that today would end, tomorrow was coming, and that at some point we were all going to die.

On that note I can also guarantee that this person and their family were not the right fit for Farley........... 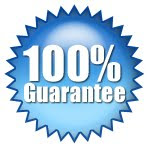 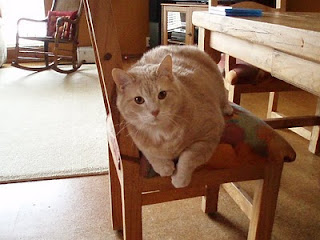 Having a foster kitty that has any sort of "special" needs whether that be medical, or otherwise, can prove to be challenging at the best of times. Depending upon the magnitude of the issue at hand and the kitty your dealing with, your efforts to ensure that a schedule and/or plan are followed can begin to resemble a covert operation or even a cat and mouse game of always keeping the upper hand (pardon the pun).

In our Farley's case, it's imperative that his diet is strict in nature in order to ensure that he's given the best possible chance of shedding afew of the 22 Ibs of weight that have been his. When he first arrived, I was full of confidance that we'd be more than successful in helping him with this task, infact I'd say I may have been overly optimistic. That was probably due in part to my having forgotten (or preferring to deny to myself), that kitties like Farley who reach weights of this nature are not those who normally would be found to be finicky eaters, or ones that you have to coax to the food bowl at dinner time. No, big boys like Farley are normally first to the bowl, and oftentimes can be found eagerly sitting close by in case there are seconds to be had - whether those come in the form of additional kibble on their plates, or on the plates of their roommates who perhaps aren't as "intense" about consuming everything within the first 5 minutes of the meal!

Now that Farley is completely settled in, meaning his food bowl now resides in the same area of the house as our own two boys, and he's feeling totally part of the family, his love of eating is in full display. Not only does he swallow his meals faster than any cat we've ever had, he also waits patiently for opportunities to help Rocky with his, just in case Rocky has any difficulty in that department!

We've had to become way more diligent in ensuring that after Rocky has had the first few mouthfuls of breakfast or dinner (and being the grazer that he is), we lift his bowl off the floor and out of Farley's line of sight. This proves especially challenging when during the week, the boys are fed just before 5:00am, and I might not be as bright eyed and bushy tailed at that hour, and so it is that I suddenly realize after making my way back upstairs to begin getting ready for the day, that Farley sure to be sure, can be found consuming whatever Rocky hasn't!! Some mornings, I wait nearby so that I can remove Rocky's bowl as soon as he's had his first taste of breakfast........the most hilarious thing is watching Farley watch me, watch Rocky. It quite literally can resemble some sort of board game in which all the players are trying to anticipate the other's next move.

Right about now it's thank goodness for being taller and somewhat faster - although this assignment is proving we will need all our wits to outsmart this particular opponent!!
Posted by Safe Haven Hotel at 1:58 PM 2 comments:

TIME AS THE GOLDEN KEY

I was somewhat concerned when I found our dominant male's growling and ornery attitude seemingly lingering for longer than normal with our Farley (our latest foster). Unless there are serious personality conflicts (which I'm relieved to report we can literally count on one hand for the all the fosters that have stayed here), the normal displays of disgust with a new roommate are usually subsiding for Rocky "Stinkerboy" - somewhere around the 2 - 2 1/2 week mark. Farley has been here almost a month now, and since I was still hearing and seeing alot of jealousy on Rock's part, a small bit of me began to wonder if perhaps he was just beginning to get really fed up with all of these strangers being paraded through, and just wasn't going to "come around" anymore. **Even typing that now just gives me a dreaded feeling in the pit of my stomach**.

But I forgot that real time cannot be controlled by any of us, and I was relieved and so happy today to see that Rocky & Farley have found that truce that is only understandable between felines........any delay in that is just my own impatience I'm sure, and the time it took if we're honest with ourselves, is when they are ready and not before! 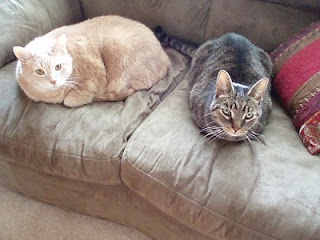 WHEN THE CRAZY GETS CRAZIER!

Some may remember the neighbour I wrote about last Summer - the one who was interested in adopting, but became quickly disenchanted with the idea when he found out that the rescue my husband and I volunteer with, spays and neuters the cats and kittens in their care.

Well hold onto your hats folks, because what I thought was an isolated incident of one person's backward view on a very important topic, has suddenly become just a little more alarming. During the course of my volunteer work on the admin side of the rescue we're with, I've come across applications from people who have expressed views that are in support of NOT spaying and neutering. When pressed about this, one person was adamant that they consider spaying and neutering a form of mutilation and as such, could not volunteer with the rescue because of our opposing views on what they referred to as an "ethical issue".

I realize I'm going to sound totally naive here but...............ARE YOU KIDDING ME???!!!!!!!! I mean seriously, how could anyone, and I do mean anyone, feel that allowing cats to reproduce with the current crisis we have in shelters and rescues and feral cat colonies, the world over, honestly and seriously be of the mindset that more kittens born into a world where the ones already here are unwanted, abused and neglected on a horrendous scale - is a good idea. How could anyone think that allowing some poor little female who is still just a baby herself in many instances, have 3 or 4 litters by the time she's 2 or 3 years old, is a good idea?
Have these people been inside the shelter system I wonder, do they see the enormous influx of unwanted cats and kittens that are dumped every day, do they know that the large majority of those same cats (who've been allowed to breed freely), will probably not make it back out of these places alive, but instead, will die alone and afraid in a metal cage, or worse on the streets of our fair city, after having battled the outdoor elements for years on end that included disease, abuse, and neglect?

I believe wholeheartedly that God gave us the ability to pro-create and that that gift is both wonderful and precious. But He also gave us minds to think with as well and to know right from wrong, and most important of all, TO BE RESPONSIBLE! When the shelters are empty, when the colonies no longer exist, and when the rescue groups can close their doors from lack of need, maybe then and only then can other ideas be considered.

Until such time - SPAY and NEUTER YOUR PETS. 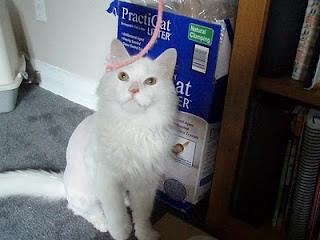 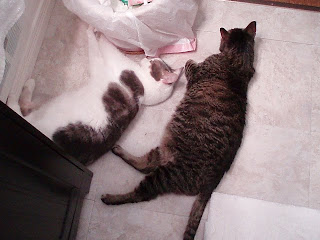 It would appear that our boys are doing their utmost to remind us EACH MORNING, of how much nicer it would be to have their lives - you know, the ones that include the slow, easy pace of living high on the hill where you have others to cater to your every need and thus, leave you with the time to enjoy the finer things in life.

The finer things in life at this particular time appears to include the new morning ritual which has both boys sauntering into our bathroom just after the alarm has gone off (and the heat is automatically turned up a notch or two), and them flopping down right under the register to bask in the warmth. They stretch, they yawn, they lazily look up at us as if to say "Oh yeah........you guys just don't know what your missing", and I admit it - I get sleepy all over again just by watching them, and I've only been up for all of 30 minutes at this point!

Whoever suggested that the life of a domestic cat is boring has yet to meet Rocky and Silly during the course of one of their morning siesta's. I don't know about any of you, but this looks downright heavenly to me.
Posted by Safe Haven Hotel at 4:06 PM 2 comments: