This Christmas Eve we give thanks for all of our blessings.............our health, our comforts, our beautiful country, precious things big and small, kindness, charity, and above all else, the very gift of life. But most of all, we give thanks for the miraculous birth of that very special baby born so long ago, the Prince of Peace who came into this world to make a way for us to return home to our Father in Heaven.

We thank each and every one of you who have ever visited with us here - whether it be once or many times over. Your encouragement, your support, your words of wisdom, your love for cats and kittens everywhere, and your desire to want to see them all with loving homes, is so appreciated and tonight we acknowledge your caring and your love for them.

So from everyone here at Safe Haven, myself, my husband Steve, our boys, Rocky & Silly and our current houseguest Oreo - may you each have a wonderful Christmas and a blessed New Year. 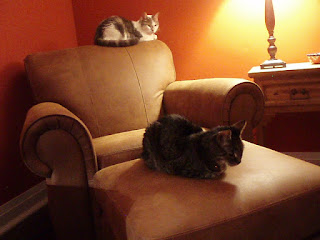 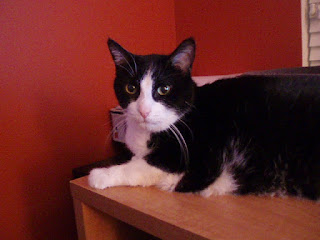 We've been able to sort out Oreo's stomach issues - a new diet and some initial laxative use have done wonders to remedy the horrible constipation he was experiencing. Ironically, now that he can go to the bathroom (and go well we might add), for some reason he is now not too keen on doing just that in the litterbox. Yes that's right, our elderly guest has decided that floors whether they be right in front of the litterbox or on the main level, upstairs, or anywhere else in between; all seem like perfectly perfect places to defecate. Now before we get too far into the doomsday of this nasty situation, we remember that there is always something to be grateful for and right now that is the fact that we have hardwood throughout our house instead of carpet AND that Oreo is not experiencing the dreaded diahrea which would truly be nasty in every sense of the word from a cleaning up perspective!

The added frustration in all of this is that from one poop to the next he's not being consistent. He does it on the floor and then the next day decides to use the litterbox - leaving us to wonder; uh? Litterboxes in this house are kept pristine in cleanliness, we use only unscented litter, and we have four boxes in total. Again it's ironic to think that when he couldn't go, he spent all his time in the box straining for relief, now that he can, he prefers to leave them as presents all over the house. We had wondered whether he now associates the boxes with the pain of before, but then that theory is blown out of the water when we see him using them at his discretion. He also doesn't appear to love our boys' company the way we first thought and has a real bullying attitude toward our Silly so we're not sure if that is playing into it?

He has been added to the site for adoption but quite honestly, he will never be adopted if we can't sort this out. I had someone (who shall remain nameless), actually suggest that I withold this from any potential adopters - to which I replied "Your kidding right?" Lying is not my strong suite but ESPECIALLY when it comes to the happiness of a rescue kitty who has already endured more than his fair share of heartbreak, and the innocent adopter in this scenario who would either be totally unhappy with him once the problem was discovered or possibly do something horrible like toss him outside because of it.

Soooooo we're just taking it day by day and still searching for the answer on this one. Otherwise, this big boy is extremely happy, purry, eating like a horse, becoming more and more of a snuggler with each passing day, and we've discovered isn't shy about tapping your leg for petting when he wishes. 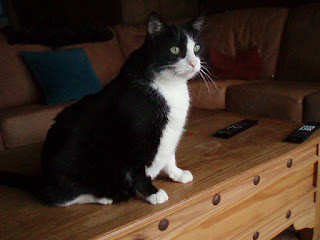 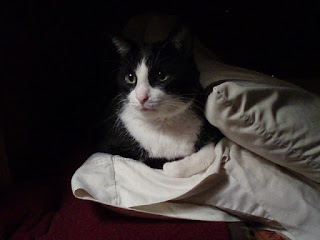 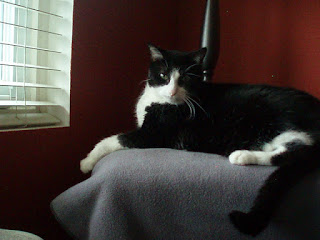 Some of you may remember our Cee Cee - the gorgeous calico we fostered that had both sweetness and sass (typical female!). Well her wonderful Mom "J" is so kind about sending shots and updates every so often and we received the latest one last night. 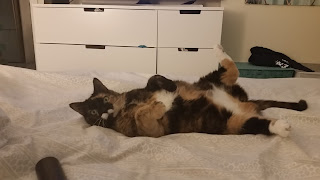 When hubby and I both looked at this all we could think was that CeeCee was saying "Hiya Mom & Dad, everything's great here!" Doesn't this shot just make you smile instantly?

We loved it but more importantly, we love that this gorgeous girl is so happy, healthy and loved!!!
Posted by Safe Haven Hotel at 3:20 PM 2 comments: