THE TINY BUT MIGHTY

With Buster settled in perfectly at his new foster home - where it's reported that he's as happy as a clam, and loving all his new found space that is his and his alone, and our own foster space currently waiting for the next guest; I've been dwelling alot lately on the feral population of cats that reside not only in our city, but in the world over.

As hubby and I have travelled, I've seen first hand the sad and deplorable situations that alot of these furry kids find themselves in as they fight for survival in cities/countries that don't have many or even any, rescue groups fighting to help them. As the horrid winter weather settles in here at home, I can't help but always find myself worrying and wondering over those that can't or won't "come in". The rescue group we are affiliated with, has put out a wonderful story about how in their tireless efforts to help those feral cats here, discovered one little boy who they were able to bring inside - one of the "lucky ones" if you will....

Although the story below is specifically "Jefferson's story", as told by one of the other volunteers at the rescue; it is just as much the story for countless others who continue their lives on the streets of not just our city, but of cities everywhere - and who I pray will all see the hand of kindess and caring first hand. 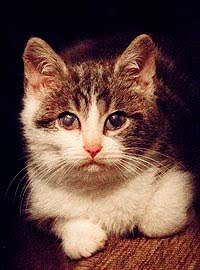 A tiny life is fighting for survival. He is a kitten, a feral kitten. His odds of living to adulthood were not good. He could have starved, froze to death, or been killed by a car or another animal. On top of that, this special kitten has a disability, one that made him unable to hunt or defend himself.

He is nearly blind. Luckily for Jefferson, he has been given a second chance. He was found on one of Annex Cat Rescue’s feral feeding routes, and was caught by one of the trappers. His eyes were obviously in bad shape when he was found, but it wasn’t until his vet appointment that the true extent of the damage was revealed.

Jefferson is a lucky little cat. The Annex Cat Rescue (ACR) volunteers who tirelessly venture out every day to feed and care of the feral cats discovered him. Along with feeding the cats, ACR carries out Trap-Neuter-Return (TNR), where cats are systematically trapped and transported to the vet to be spayed and neutered. After the cats have recovered from their surgeries, they are returned to the colony. The TNR method prevents the birth of unplanned kittens, like Jefferson. Cats and kittens who are deemed sociable enough are given medical treatment if necessary, cleaned up and sent to Foster homes, as they await their new, permanent families.

Currently, ACR has nearly 50 adoptable cats and kittens who are waiting for their forever homes.

Little Jefferson is one of them.
Posted by Safe Haven Hotel at 11:25 AM No comments:

WRITING ON THE WALL

I've always found it difficult when a foster's stay with us doesn't turn out the way we intended or had hoped for. Thankfully those instances have been few and far between - the great majority of kitties that we've had the pleasure of having as houseguests have gone on to be adopted from our home. But for those few that we've lost through illnesses that couldn't be recovered from, or through a move that had to take place because this just wasn't the right environment for them, I always find myself reflecting on them and wishing that it could have been different. Even re-examining whether or not we did everything possible for that particular boy, and in the end didn't fall short on trying everything possible. 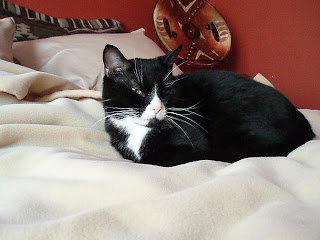 Case in point - Buster's stay with us. It is clearly apparent now that Buster is not happy in our home; and does not relish sharing his space with other cats. Every single night, after a full day of napping and renergizing, he spends his evenings (and well into the wee hours of the morning), bullying, chasing and just pure instigating every kind of trouble you can imagine with Rocky & Silly. 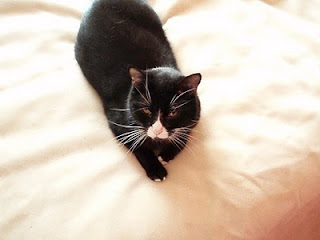 When I watch him and see how he prefers to be on his own than to join us as a family, when no amount of coaxing will have him wanting to be with us instead of away from us, and when all attempts at 1x1 time are even met with disinterest and almost an expression of resentment, plainly put - I feel really sad for him and totally to blame that he's not happy.

This is one of those instances when you wish as a foster parent, that these little guys could talk and could tell you in advance upon rescue, whether they would prefer to be in amongst others, or find a place where they could be the centre of attention. The hopeful news in all of this is that another foster home has opened up and arrangements are nearly complete to have Buster moved to that home where he doesn't have to share his space. 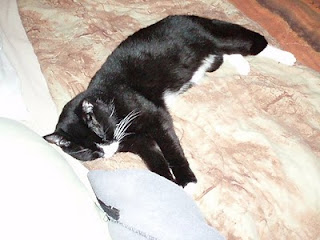 We know in our hearts that Buster will be much happier in that environment versus this one, but I for one, can't help feeling somewhat as though I let him down as I look at him, that I haven't been able to provide an interim space that he's been happy in...........I try to remind myself that most important of all in this situation is the fact that he's safe, and that because of that, he has that second chance for true happiness which is really no further away than right around the corner. Still, taking him to another foster home will be met with mixed emotions on this end.............
Posted by Safe Haven Hotel at 11:11 AM 2 comments: