Two weeks ago today my older brother Rick died of a massive coronary - he was 59. It was about as sudden and shocking as you can get...........one minute he was waiting for a bus at the subway, the next a transit employee was performing CPR. If you have been reading my blog for any length of time, you know that I also lost a younger sister afew years ago. Actually it will be 4 years this coming Saturday, so now I will be visiting two gravesites every August - so heartbreaking to say the least. 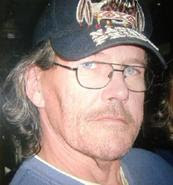 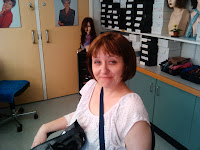 The day after I learned of Rick's death, I was sitting in my home office thinking upon his life and the life of my sister and feeling a great sense of sadness. Suddenly I received notification that I had a new email waiting in my inbox and somewhat absent mindedly, I opened it. There before me was a lovely email from formers adopters "S & A" who had taken home our Marigold. Here's an excerpt of her email and the lovely photos she enclosed:

We are so happy to tell you that Marigold is a HUGE part of our happy family. A and I got married at the end of June and to incorporate Marigold into our wedding, we added her to our cake topper. Marigold is becoming quite the well-travelled cat - staying in hotels in Brockville, Ottawa, Montreal, Niagara-on-the-Lake, and this weekend we're off to Gravenhurst. She's happy to go into her carrier, and she is well behaved in the car. Once in a hotel room, she loves to explore - smelling EVERYTHING before settling in on the highest vantage point in the hotel room. We love her dearly, and cannot imagine our lives without her. 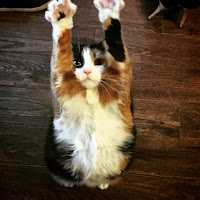 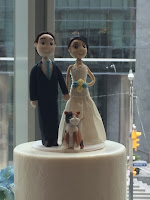 It wouldn't be enough to say that this email/pictures made me smile. In the moment of raining sorrow, the Lord reminded me that there will always be sunshine after..........
Posted by Safe Haven Hotel at 4:32 PM 4 comments: 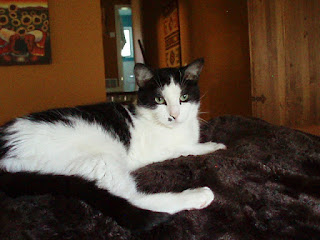 You might remember Bumble & Ziggy, probably two of the most gorgeous cats looks wise, that we've ever fostered! Their Mom keeps in touch with us and I swear that these two hunks just get better looking the more I see of them. 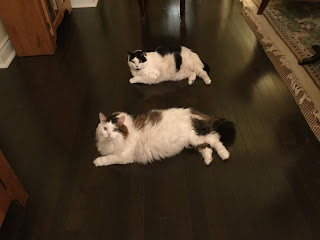 If there was a Hollywood for animals, these two would surely be the paparazzi's favourite pastime.

Of course it goes without saying that what warms our heart the most is how fully they are loved and so well cared for!
Posted by Safe Haven Hotel at 10:22 AM 1 comment: