I know it's been several weeks since I last wrote, to say it's been abit crazy would be putting it mildly.......

First off, our darling Dooley is still with us but just. That's due to the fact that almost three weeks ago now, he urinated on our leather sofa practically right in front of us, and then as we scrambled to clean and cover some other leather pieces we had as well, it was discovered that a brand new chair in our home office had been urinated on more than once, unbeknownst to us. We were furious, then devastated, then furious some more.................the sofa and chair are custom made, very expensive and items that we saved for in order to acquire. Even typing it makes me cringe because I know how it makes us sound, but believe me when I tell you that it's pretty easy to say that materials things don't matter until you see them damaged right in front of your eyes.

We immediately made plans to have Dooley moved to another foster home because inappropriate urinating was just a deal breaker for us - and it was also a first in almost 140 fosters if you can believe it!!. Not only were hubby and I both upset, we started fighting with one another and suddenly Dooley was "my cat" - not nice. However, there aren't alot of foster parents who want to take in a foster that is having litterbox issues so almost a full week went by and there was still no place to move him to. In the interim, we also decided to take him in to the vet for an urinalysis just to be sure there wasn't anything wrong medically to bring on such behaviour. Turns out that he has struvite crystals and a very elevated PH Balance - BINGO, BIG PROBLEM that explained his actions.............he was trying to tell us that he wasn't feeling well.

Soooooo with my house looking somewhat like a storage unit because we continue to keep furniture covered, Dooley is now on a prescribed diet and is doing wonderfully! It's been very stressful, and continues to be so to some degree because we're not sure if he'll start again, but we are really trying at this point to see past this because it is what it is, it's happened (and taken weeks to clean our furniture which we're still working on), and we really want to see him adopted into a good forever home and not have to put him through the stress of another move before that comes. 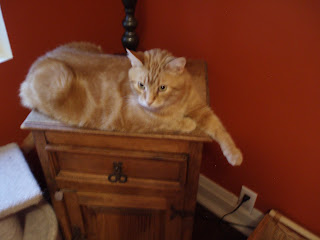 And in other news...............remember beautiful Beaumont that we returned to his owner when they appeared? Well we received a call this week that he's been found outside again by the same TNR colony caretaker who trapped him the first time. Appears that his owner suffers from mental health issues and not only is not taking care of him, but is also quite possibly a cat hoarder. So utterly heartbreaking to hear this news, especially since he was rescued once, had the potential for a wonderful forever home, and now finds himself homeless again.