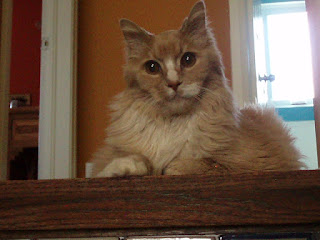 One thing is for certain........the person that claims cats cannot overcome, has never met our Muff. Homeless again for the 2nd time in his life (that we know of), elderly, and having been taken from someone that he grew used to and loved for the past 8 years, is more than most would be able to battle back from - but battled back this big, easygoing boy has and he's done it in style.

He's calm, collected, quiet, and so easygoing it would amaze just about anybody. The only time I see even a hint of ornery self from this fella is when I'm brushing him and he grows tired of the grooming..........he usually makes a noise and gives a swat to say: we're done for tonight! Otherwise, he's quite content with whatever else you can offer in the way of affection and attention, and asks for very little. Physically, he's in good health, recent bloodwork showed nothing disconcerting and his kidney levels remain very reasonable for a boy his age, so for that we are so grateful.

He'll go up on the website any day now. It breaks our hearts to think that once again he will need to endure yet another change and a move, but we know he can do it and we're looking forward to finding him a new home where he will be cherished and spoiled rotten for the remainder of his days.
Posted by Safe Haven Hotel at 3:27 PM No comments: 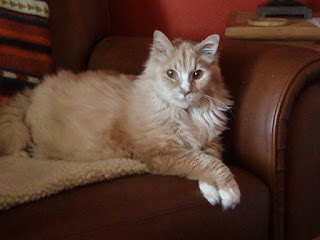 Muff is settling in okay we think. Of course, there are moments when I look at him and I swear he has simply accepted things because he knows that they can be no other way now. We had him to the vet yesterday, he weighs in at 20Ibs unfortunately, but that doesn't surprise us since the size of the bowl his Mom was feeding him from was big enough for a Great Dane, and they were living together in a bachelor apt so he wasn't getting any real exercise. And in saying that, there is no malice in those statements since I know she loved him and gave him the best of what she had. He also has arthritis in his back legs, and has some telltale signs of early kidney disease but neither is surprising given that his age is somewhere between 11 - 13 years.

He has full run of the house now and has been as good as gold. Very quiet, sleeps a great deal, and LOVES attention. His coat is in desperate need of some TLC since it appears he has stopped grooming, but tolerates brushing for quite abit of time before getting abit ornery. Again, nothing concerning and almost expected with a boy this senior.

His Mom called early last week to see how he was. Another very tough conversation since I could just hear the longing in her voice for him, and I'm sure a deep sense of sadness, especially given what she's facing. I reassured her that she's welcome to call anytime, and I'm happy to let her know about his new family when he's adopted - she did say however that she knows she can't continue to ask about him because it only makes letting him go that much more painful.

I so admire her strength and courage and have no idea who I would face a similar situation if it was visited upon me.