We have former adopters of ours who have kept in touch with us since they adopted "Connor" a number of years back. As adopters go, this couple are the salt of the earth. You will never find more loving, caring, compassionate, kind pet owners whose furry friends are truly members of their family. Each winter they head down to their Florida home to wait out the winter; normally taking Connor with them, who in the past has loved all the things that life in a warmer climate has to offer (including being able to laze around outside - fully supervised). Last year however, Connor took seriously ill for a time and so on their vet's advice, this year Connor stayed home to be cared for by family, while they travelled.

Like I've said before, I believe everything happens for a reason. Yesterday, while shopping at Walmart in the Florida city they are in, they came upon this little girl............who was on a skid of mulch in the gardening section. Who knows how she got there, how long she'd been there, or where Mommy and siblings are, and although she is very tiny and very delicate at this stage of life; this couple immediately scooped her up, obtained the necessary supplies they needed to feed her, and have already decided that if they cannot arrange for her to be taken in by a rescue or someone else that can care for her there, they will bring her home to hopefully find her a home. Already, they have taken her under their wing and have named her "Wallemena".

Now don't we wish that every single person walking this earth would be so completely giving and concerned.

Posted by Safe Haven Hotel at 5:27 AM No comments:

Flossy has become such a great little helper when I've got things to do! Just last weekend, my husband came upon her and I as I folded clothes and she'd come to my aide by sitting on the different piles as they were almost ready for putting away. When there are dishes to be done, she can be found sitting at my feet, ensuring that my toes don't get cold while I'm standing. Today it was helping me with abit of reading - here she is sitting upon my book as I was about to finish.

Who could ask for more..........you won't be adopting just any kitty, but one that is very helpful around the house as well. :))

Posted by Safe Haven Hotel at 3:56 PM No comments: 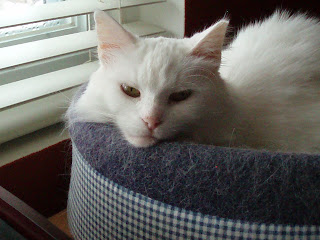 I'm taking lessons from Flossy on patience. She still waits, calmly and quietly for her forever family; here she is in her favourite spot, the infamous cat bed that is loved by one and all who've passed through these halls. My one wish is that someone soon will reach out and want to at least meet her - she'll be sure to steal their heart if only she could have that one opportunity to tug on their heart strings with her loving little self.

There are countless cats and kittens waiting to be adopted - of this I can assure you. Cats that are physically gorgeous, cats that are personality plus, big cats, little cats, cats of every colour, some with green eyes, some with blue. But there isn't another Flossy anywhere and it can't be that she miraculously survived the horrors of life outside, was brought into safety to find love and trust once again, only to discover in the end that noone wants her.

Her fight to survive can't have been for nothing. I know that there are sadly so many other cats just like her, right now, fighting the elements, the dangers, the hopelessness of living on our city's streets, with a very dismal future in front of them. But THIS cat made it out, and she fought to hold on to that second chance. Now she deserves someone of her own..............

Posted by Safe Haven Hotel at 10:00 AM No comments: 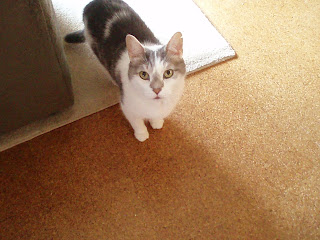 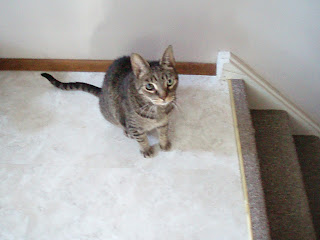 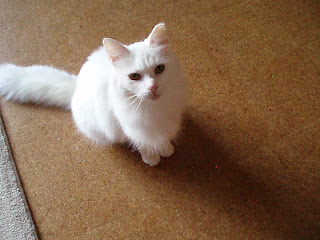 We've reached out far and wide in an attempt to gain Flossy as much exposure as we can, in the hopes of finding her forever home. There's a saying in rescue work, "There is a home for every cat" - I've held firm to that belief for all these years because I've seen 60 odd kitties leave the sanctuary of our home into the arms of individuals taking them to theirs - and thus proving it true time and time again. I just refuse to accept (plain and simple), that a cat as loving, as friendly, and as gorgeous as Flossy is going to be the exception to that rule.

I'll be honest, having had her as our foster for nearly the past year and half has ultimately meant that we haven't been able to rescue anyone else, and at a time when the Safe Haven averaged about 1-2 kitties per month in adoptions, that's difficult. It's not about nunbers, but it is about my knowing how many beautiful, loving cats just like Flossy sit in cages on death row in shelters, feeling abandoned, scared and forgotten, in countless places throughout this city, alot of them having given up hope that there's still kindness out there somewhere; and the huge desire we have to help them, even if it's just one at time. Sure I could take easily take another foster kitty in right now (maybe even two), but when we started this in the beginning, our golden rule was that we would never have more than one foster at time; not only to be fair to our own cats, and to the foster themselves, but to keep everyone's stress to a minimum (including our own).

Lastly, Flossy deserves her own home. Granted she doesn't know that this isn't it but I know, and that's enough.

So here's to fingers, toes crossed and many silent wishes that him or her or them is out there and we'll find our Baby Girl very soon.

PS: A huge thank you to everyone who has helped to spread the word about Flossy - your support is greatly appreciated!!
Posted by Safe Haven Hotel at 3:04 PM No comments: