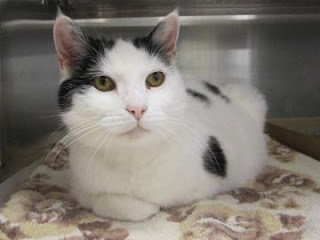 Would you believe me if I told you that the above darling (named "Aggie") has been waiting patiently at the Toronto Humane Society since LAST December 9th for someone to adopt her?

Another volunteer within the cat rescue world has made me aware of Aggie and the long wait she's experienced through no fault of her own. Although abit shy with strangers and not terribly fond of other kitties, Aggie is friendly and very playful once she feels comfortable in your presence, and even has a fondness for little toy mice, so I'm told! Noone is quite sure what it is about this little girl that has people simply passing by her cage, but one thing is for sure - no kitty deserves to be overlooked to the degree that Aggie has been and certainly not when their sleeping quarters every night has to be a small little metal cage instead of a soft warm bed or a comfy chair in a cozy livingroom somewhere!!

Aggie is approximately 5 1/2 years old and just look at the gorgeous little opaque pink nose of hers - how could anyone simply pass by her cage without falling in love? If ever I've felt a kitty tug at my heart strings, it's Aggie and I hope that by posting about her plight here, someone may know someone who may know someone (you know how it goes), who may be dying to have a little friend like Aggie to share their home time with.

Please feel free to contact me or to pass along my info so that someone else can contact me, so that together we can help find Aggie her forever home. I know that person/s is out there...........so let's do what we can to help connect this precious kitty with them so that her days of being alone can finally be over.
Posted by Safe Haven Hotel at 3:24 PM No comments: 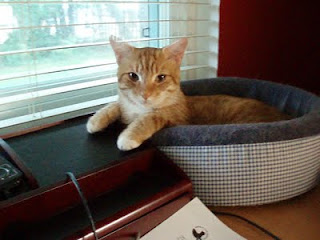 Doesn't he look great? Doesn't this picture just make you want to kiss him to death and cuddle him until he squirms out of your arms? Doesn't his little face just say it all? I've looked at this picture countless times since snapping it this past weekend - and it's one of the cutest I've ever taken I think.

Red is thriving just two weeks after joining us indoors. He's putting on weight, he's settling in and appearing less restless, and he's even begun playing games of tag/chase with our Silly which is always a great sign. I find myself looking at him constantly, when he's sleeping, when he's eating, when he's grooming and when he's laying down relaxed like he is here, enjoying all the things that every kitty deserves to experience - the comforts of a safe, warm, cozy environment. I still can scarcely believe that he's with us and it may take abit more time before it actually sinks in that we were successful in rescuing him.

Now that Farley's future is so bright and full of all things good, I'm completely turned toward Red and his future which awaits him. It's the natural progression of things in fostering for me - once I know that my last little friend is well and on his way, I can then refocus and begin again. I've already had one inquiry for Red and the family visited with him this past weekend but we were all somewhat skeptical that it was the right fit for him and them, so we continue to enjoy his company for abit longer.

One of our fellow rescue volunteers indicated prior to the family arriving, that she hoped they'd love him as much as we do. And then my husband after their visit, said that because of all the odds that Red had to fight against to survive, he cannot go to a home of anything less than one that will cherish and spoil him entirely and wholeheartedly - just the way he deserves. It's nice to hear those words from others because sometimes I think I'm the lone soldier whose the only one to pull out the testing stick of worthiness for potential adopters.

I can't wait to meet the person/s who will open up their hearts so that we can see just how perfect they would be for our Red. I don't know what they will look like, but I know what they will sound like and how they will say it; and it's going to be so wonderful when they do finally get here.
Posted by Safe Haven Hotel at 3:50 PM 1 comment:

I got an email earlier this week that indicated there was someone interested in meeting Farley. Except for another enquiry that had come through just the week prior to this one, there hadn't been any interest in our big boy for at least a couple of months. I knew deep in my heart that eventually his forever home would come for him because I do sincerely believe that there is one for every kitty rescued, but I was abit nervous as I typed an email to the interested party, wondering if this could really be them.

They replied to my initial contact almost immediately, and I learned that it was two sisters who had recently lost their beloved companion and were hoping that Farley was going to be their new friend. We arranged a meeting for the next evening and when they arrived, the honest to goodness truth of it is that I liked them instantly! They asked all the right questions, I learned that they had already purchased Farley's current food for him (which is weight reduction I might add and not of the cheap variety), and that they were very experienced cat owners. They loved him on sight and after a visit that lasted about an hour or so, we agreed that they should take him to his new forever home right then as opposed to waiting the 24 hour "cooling off period" that the rescue normally likes to implement.

I don't know that I'll ever become accustomed to just how fast an adoption can take place when the right people step forward to offer your foster a forever home. But in many ways I'm extremely grateful for the speed with which it happens - it somehow helps to ease the sadness that comes with bidding one goodbye. The next morning was especially strange as I awoke and realized that Farley was really gone, I found myself listening for him to come to the food bowl as I laid out breakfast; but there is also the sweetness in knowing that his future is safe, and bright, and full of hope. Already I've learned that he's doing wonderfully and that his new family loves him dearly in just a few short days. 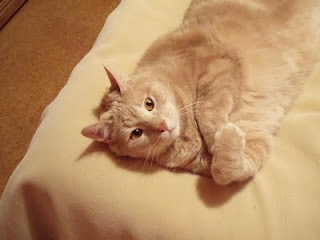 Six months we were together and I wouldn't have traded a single moment of any of that time. He will always be my friend and I will always be here for him if he should ever need me again............someday, somewhere, I'm positive that we will see each other once more.
Posted by Safe Haven Hotel at 9:23 AM 2 comments: