THE LOVE OF A FRIEND

The one other aspect of fostering that we love equally as much as helping these kitties initially, is keeping in touch with adoptive families who are kind enough to keep us updated long after the adoption is final, and allow us a glimpse into the happiness that surrounds them and their new family member as they embark on a life together.

This evening's entry is a tenderhearted tribute to one such previous foster and his family who treasured him. He entered their lives and has forever etched his pawprint on their hearts. 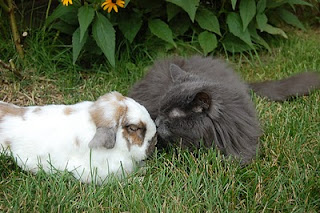 Jazz was a gorgeous long haired, smokey grey male that was a complete darling in every sense of the word. We fostered him afew years ago, for quite some time before "H's" family decided to adopt him. Sadly, not long after joining them, health issues began to arise. But like the fighter he was, he battled back from all of them and continued to be a loving and precious member of their family. Sadly, his health issues reached serious proportions just in the last few weeks, and yesterday I received word that Jazz's loved ones felt it was time to end his struggles and allow him the peace that he so rightly deserved.

We will never truly understand in this life why it is that some of us live, long healthy lives, and yet others are here for only a brief time and seem to suffer so much. If love alone were the piece of the puzzle that could save all those we care for so deeply, we would never have to find the ways in which to say goodbye to our Jazz's.

We with H's family, are saddened tonight as we come to term with Jazz's passing, but we rejoice in knowing that he was loved and deeply cared for and will forever be remembered for the special kitty that he was. You are missed already dear friend, and we look forward to the time when we will see you again. 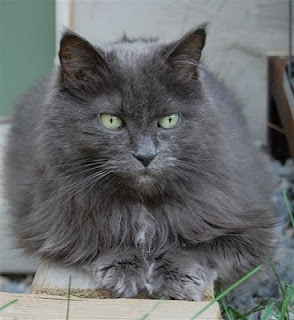 I'm writing again so soon simply because if I don't record what's been going on here since 7:00am this morning, I might be inclined not to believe it myself later on!

Firstly, we've named our new little houseguest.......Buster. It wasn't without its debates, and your suggestions for new names were greatly appreciated and all tried out, however, in the end Buster just seemed to come from nowhere and appears to be the perfect fit!

We decided that having been quarantined since last Wednesday night, this morning was a good time to begin the introductions and see what we were all in for. I'm not even remotely kidding or exaggerating when I share with you what we were faced with after only 30 minutes of Buster's emergence from his "private quarters" (as we like to lovingly refer to them)............ 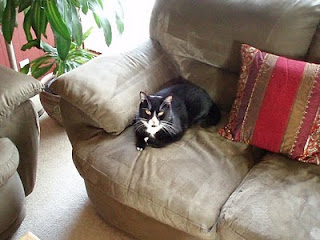 He has not growled, hissed, arched his back in a territorial posture or even so much as hinted at being dominant, aggressive or pushy. In fact, he sauntered out of his room, had a leisurely jaunt through the upstairs of the house, proceeded to the main level and then through the basement, stopped at Rocky's food bowl for a quick bite (why not when food presents itself?), and then oh so naturally proceeded to hop up on the sofa and voila!..........looked at me as much to say "Awwww finally, this will do nicely". 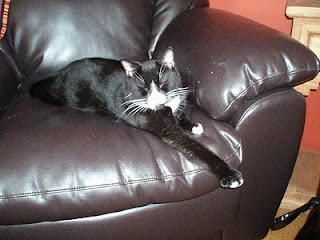 He has greeted Rocky and Silly both with enthusiasm and friendliness and has already tried to engage Sylvester in play (Rocky he's realized will take abit longer to win over). Oh and did I mention that I'm in total shock?, that we are in total shock?......I mean I've had some pretty easygoing fosters in my time, but all this within 30 minutes - I think we've absolutely set some sort of a record here.

Who in their right mind would let go of a cat so handsome and so amazing as this? What a fool who thought that they were getting the upper hand by dropping Buster off at a shelter; clearly he's having the last laugh.
Posted by Safe Haven Hotel at 2:27 PM 4 comments: 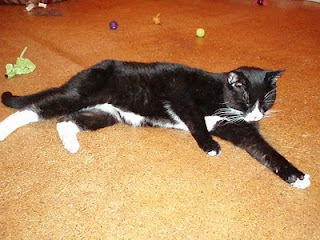 I'm all for proper introductions but unfortunately at the moment we're at a loss as to what this little boy's new name should be. We'd be happy to take suggestions, so please feel free to let me know if anything jumps out at you name wise as you look at his picture.

He arrived last night after having spent close to 3 months in a shelter cage - I just shudder when I think of it. What always amazes me the most about these darlings, is that in spite of having endured the hell of daily life on death row in a shelter, those lucky enough to make it to the other side can be and often are, some of the gentlest, sweetest, most laid back kitties one could ever hope to meet. This boy is no exception..........so far he presents himself as extremely quiet, calm and extremely easy going - amazing when you think of how rotten they've been treated.

I'll have more shortly as we get to know him better and of course, once he's had full exposure to Rockstar and his jealousy filled saber tooth tiger impression.......I wish there was a way to warn him in advance of what he's in for! *L*

We're so excited to have this new little guy here and hope that he enjoys being with us.
Posted by Safe Haven Hotel at 4:19 PM 1 comment:

Since Rascal's adoption two weeks ago now, we've kept in very close contact with our little boy's new family to ensure that everyone was adjusting okay.

Imagine my happiness this morning when I went into work and discovered this picture sent along with an email that read: "I just wanted to send you this picture of rascal with pilkey cause they sleep together on my bed and I kiss rascal everyday" 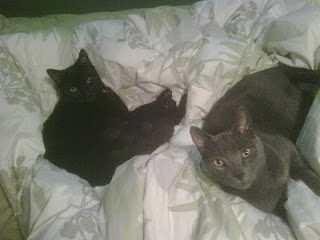 This makes all the tears, all the worrying, and all the sacrifice more than worth it. To see this beautiful little boy with his own forever family, and new forever friend in Pilkey, is all we need to be able to really let go now in the knowledge that he's happy and loved and..........home.

CALM BEFORE THE STORM

Rascal has been gone exactly 1 week tonight. It's been an incredibly difficult 7 days - the sadness, the longing, the worry, but I'm so happy to report that his new family has kept in very close contact this past week, and not only is Rascal doing great (except for a stress cold which he developed a couple of days ago), but his new roommate Pilky is warming up quickly and even appears to be taking on the protective older brother role - *YAY*!!!! It makes us feel so much better to know that he's being so well cared for and loved, and that most important of all, he's happy. We're looking forward to pictures so of course we'll be posting some here for everyone to see when they do arrive.

In the meantime, our home has returned to a quieter, strangely relaxed state, something that is noticeably absent when a foster is within our midst. It's not that our little houseguests cause alot of mayhem *L*, but rather that there's a real noticeable difference in Rocky & Silly when its just the two of them versus when there's a trois. Case in point, I draw your attention below...... 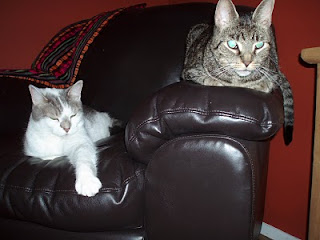 Honestly, I ask you.......does this not look just too good to be true? Both our boys not only slumbering, but TOGETHER?????

We're all waiting anxiously for our next houseguest. Maybe they figure its best to get in all the R&R that they can while the gettings good! - one never knows what to expect character wise from the next set of four paws and a tail that comes through the front door meowing "I'm Here"!!!!!!!
Posted by Safe Haven Hotel at 4:58 PM 4 comments: