I had written this beautiful post this past Saturday morning to announce that Farley had been been adopted. I had an amazing sounding lady call me late Friday at work and after a lengthy conversation, was very anxious to meet Farley - so we had set up an appointment for that evening.

They came, we spoke at length........and I do mean at length. My throat was literally hoarse from going over with them the importance of having patience with a new arrival in their home where there was already an existing kitty, about how Farley would most likely be nervous and stressed as he arrived, and how important it was that they give him lots of time to settle in and not to be discouraged if he presented distant upon first arrival.
This couple seemed to be absolutely wonderful, they asked all the right questions, were very interested to learn all about Farley from the time he'd been with us, and were excited at the prospect of taking him home to join their family. They were so anxious to adopt him, there was even a gentle questioning as to whether the 24 hr "cooling off" period could be waived so that they could take him home that evening. In the end we agreed that they should think about it overnight and call the next morning if they wanted to pursue the adoption.

Well the call came at 8:00am and yes they very much wanted to adopt Farley. I took again afew moments on the phone with the wife to go over afew more things and we then set up a time for a couple of hours later for them to come and pick our big boy up. I prepared Farley with a very nice brushing session so that he would look extra handsome when they came, we picked out his favouite toy that he'd take with him for the journey and to hopefully ease his anxieties about this new, strange place, took a nice picutre of him that I could post here so as a farewell, and finally, I kissed him and had my time with him to wish him all the happiness world and to tell him that I would always be here, and would always remember him.

Seven hours after he was picked up, the husband called to say that Farley had bit both him and his wife and his wife now felt afraid of Farley and they would not be keeping him. They arrived back at our house, and handed Farley back to us as if they were returning a microwave or a car they taken a test drive in and decided wasn't for them.

Farley has resided in our home since mid February. He has never once in all that time bitten or scratched either of us, and has never even shown anything that could be even remotely considered aggression. Since returning to us, he's barely left my side, and it's as if his eyes say, "Mommy that wasn't fun".

There was no patience, no understanding, no following of basic common sense when introducing oneself to an animal that you are a virtual stranger to, no respect or concern for what that animal is experiencing at that moment, and most of all, no following through on promises made only a few short hours before. 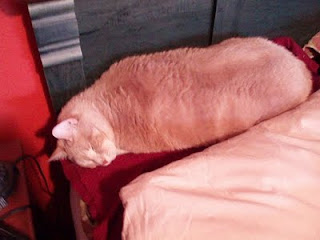