I'm almost afraid to say it, but I think we've finally settled into a routine with 9 cats in the house. I can scarcely believe that it is actually that many - the most we've ever had at any one time..........needless to say two of those are ours but still; HOLY CROW!

Since Flossy & Finn are in the holding stage for adoption, we're taking this time to try and help them to get to know one another and to make the transition to their new forever home together, a little less stressful. So far it isn't going too badly, the first couple of nights it was Flossy hissing at Finn, last night it was Finn hissing at Flossy; which is completely hilarious to watch since he's 10 weeks and she's full grown. I did however manage to get them in very close proximity to one another last night as I began teasing them both with the same toy...........when I say close I mean about a foot apart and they didn't do too badly at all. I don't foresee any major problems when their new Mom takes them home.

All of the kittens have now had their neuter/spay surgeries - the last three came home last night. Funnily enough, we thought we took in two girls and one boy, and it turned out it was actually two boys and one girl. Apple became Ollie! - I should have known............his wiry little ways were a dead giveaway for a boy!!

Of course this entry wouldn't be complete without afew new pics, hope you enjoy. Oh and btw, I have another potential adopter coming tomorrow night to possibly adopt two kittens, so it looks as though that number 9 will be dramatically reduced sooner rather than later. 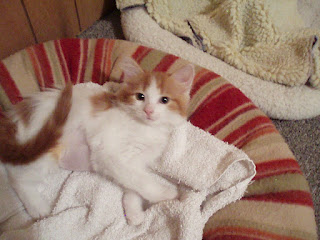 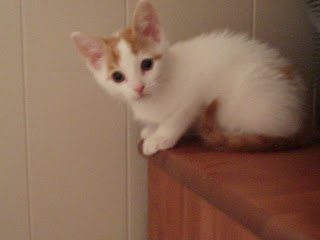 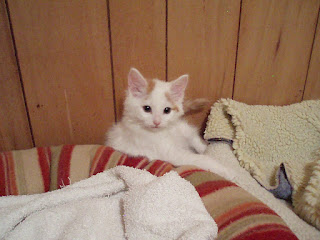