IS IT AN OREO? 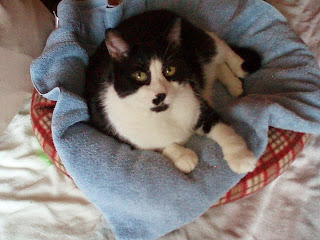 I don't know about you, but everytime I see a black/white kitty, all I can think of is oreo cookies. Rest assured however, our new friend here isn't going to get slapped with the name Oreo (my hubby would veto that in a heartbeat!), he already comes with a name since he too is sadly another owner surrender to the shelter.

Buster is his name and he's approximately 5 years of age. Two pieces of great news are that because he and his friend Baxter (yes unfortunately we had to split these guys up to save them both), weren't in the shelter system that long at this point I don't see any signs of a URI rearing it's ugly head. Of course it could make it's appearance at any time and since he's only been here not even 24 hours yet, I could be eating my words sooner rather than later, but fingers crossed we can escape it just this once.
The second bit of good news for this sweet boy is that his dental exam turned out to only be a cleaning - no extractions! I was so happy for him!!!....... 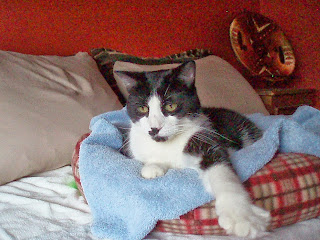 < He also BEGGED to be let out of his room this morning so I relented after he managed a pretty good escape (okay so maybe I wasn't that stern about it). He had a couple of hours to walk around, did amazingly well in meeting the boys, but alas, an hour of Rocky's growling and stomping was all it took, and he happily went back to the guest room of his own accord where he's now down for a much needed nap I'm sure.

So far, he's nervous and uncertain but I'd would be too if I'd been ripped from my home, separated from my friend, and found myself somewhere totally foreign.

Let's see how the rest of the weekend unfolds.
Posted by Safe Haven Hotel at 6:55 AM