AROUND THE NEXT CORNER 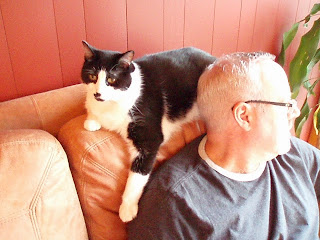 We had an adoption call for Buster late last week. I didn't make any mention of it simply because I was somewhat hesitent given that this enquiry was coming from someone who let their current kitty outdoors. In all fairness, this person did indicate that the backyard had been "kitty proofed" to an extensive degree, and that the resident kitty had never escaped and yet still, there was something about this situation that made me very nervous.

But despite my misgivings, I agreed to allow "N" to come and meet Buster tonight and explained that we'd see how it went. N showed up 15 minutes early and came with a new toy in hand for Buster...........which he loved and couldn't stop playing with once it was given to him. I also was struck by how much he seemed to instantly like our guest; rubbing up against her, meowing to her, and coming back time and time again during the course of their visit, to show her affection and to allow her to show him the same.

After an extensive discussion, I soon realized that not only does this woman love her current cat a tremendous amount and would do anything to keep him safe, she is also extremely caring and protective where all kitties are concerned and the long and short of it is that I had a feeling came over me that let me know she was going to make Buster a fantastic Mom and provide him with a dream forever home. She was instantly taken with him, showed me pictures of her own boy Blueberry (who is white/black just like our boy), and talked about her previous kitty that had lived to be 18.

What started out as a skeptical meet n' greet, ended up being an adoption. By the time our visit was up, I was this young woman's fan, and was so thankful she'd stepped forward to offer Buster his 2nd chance. As unprepared as we were for him to leave us tonight - I'm indeed thankful that his departure was to a future filled with so much love.