A LITTLE LADY AMONG US

Our new foster's arrival hasn't been without it's share of stress - at least initially. After picking her up last Saturday, we settled her in here at Safe Haven and began the welcome. Lots of attention, petting, soft, reassuring voices, and even some brushing; but through it all she was pretty much absolutely terrified. So much so, that she was in desperate search of somewhere to hide in her room, but we've constructed things in a way so that there's no access under the bed and the closet remains closed. She was forced to resort to digging herself a trench under the pillows on the bed (where she was spending a great deal of time), or squeezing herself in between the bed and the nightstand with her face to the wall. I don't know about you, but there's something about a kitty that is so afraid as to press themselves face first into a wall, that really disturbs and saddens me.

Added to all of this was non interest in food. I don't mean a small disinterest, I mean a large one and by Monday it was growing increasingly concerning because with heavier cats there is a real danger of liver issues if they haven't eaten within 48-72 hours. We must have tried 4 different types of wet, 5 different types of dry, cooked chicken, tuna, tuna juice, Temptations treats and the result was always the same - nada. So a call into the rescue determined that a vet trip was in order, A) to rule out anything serious and B) to try and get some food into her. Again, another car ride to another strange place took it's toll on our girl, and not only did she cry the entire way, she was also scared enough that she couldn't hold her water and ended up peeing all over herself.

The vet determined that she was dehydrated and the recommendation was made to keep her overnight at clinic to provide fluids, encourage eating, and get to the bottom of what was going on. Twenty fours laters, the tests run determined absolutely nothing physically wrong with her, she had to be force fed in the morning, and was now hydrated. We decided to bring her home (this time with appetite stimulants), and pray for a turn.

Our little girl turned alright! - 180 degrees. Within two hours of being home Tuesday night, she'd eaten, used her litterbox, and was one of the happiest kitties I'd seen in a long time!! She was purring, prancing, rubbing up against us, and just totally transformed in behaviour. Her appetite is now totally back on track, she is settling in nicely and has done really, really well with the boys. Although quite unsure of them both and somewhat terrified of Rocky (who isn't?), she's been as good as gold and is enjoying free run of the house!!!

So here she is - our little beauty who we've named Addy or Miss Addy if you will..........I think she was suffering from a broken spirit in some ways, losing your home, and your securities at 10 years of age, only to find yourself in a shelter is not conducive to a happy cat - we're just SO THANKFUL that she's realized quite quickly that this palce isn't so bad afterall. 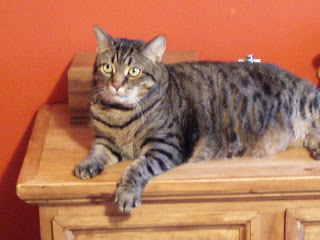 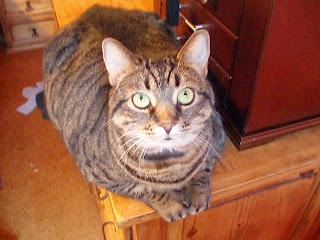