We received word yesterday that there was a female at the shelter who they were hoping to rescue. They asked if we'd be willing to welcome her, and even though Rocky doesn't do too well with females as a rule (he's too dominant and they also normally like to be the boss), I couldn't help but say yes when I learned that she was 10 years old and an owner surrender.

So we were up early and off to the other end of the city we went. We made a pit stop on the way back at the vet since we wanted to ensure that she wasn't beginning the full throes of a URI, and if she was on the verge, that meds could be picked up which would help to ward it off. Turns out she has a fever but no other outward signs of the dreaded respiratory illness so common in the shelter world, so home we came.

And here we are. She's very nervous at present and very unsure of what's going on around her. She's a big girl, with a coat that is sorely in need of some TLC but nothing that can't be remedied while she's our guest here at the Safe Haven...........after all, I think it's safe to say that pampering is our specialty. :)) 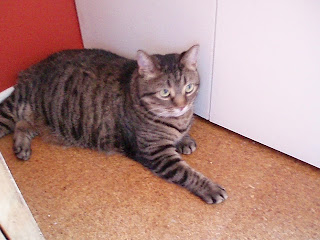 Posted by Safe Haven Hotel at 9:12 AM