While out and about today continuing to enjoy our vacation, we needed to stop at Petsmart to pick up afew items for the kids. Normally, I don't go into Petsmart, just like I don't go into any pet store where I know there could be cats, kittens and or dogs in cages. It's the same reason that I don't do shelter runs, visit rescues/shelters on the internet that I know house their rescues in cages, and why I avoid even the THS (except for the lobby and the kitty cat lounge) like the plague. I know it's going to sound ridiculous to many, but as involved as I am in rescue work and in fostering, I cannot stand to see an animal in a cage - even when I know that I'm looking at a rescued animal who is now warm, and safe. It's my weak link if you will, my "I can't do this" hang up, my lack of guts.

Today I made the mistake of going against my rule and I went in and you guessed it, made straight for the area with the big sign that read CATS - my inner voice was being drowned out by the sound of meows.

There were only a few kitties there, a couple slumbering and one big gorgeous male who looked incredibly depressed and unhappy. While I stood there wishing I could pet and reassure him, two ladies arrived with at least 6-8 carriers of kitties that were joining, and making plans to take the ones currently there back to their foster homes. The name of the rescue that these woman were affiliated with shall remain nameless, but in standing there and greeting both of them and their little travelling companions, I learned that one of these woman was infact the President of this rescue - and that is probably the nicest thing I could say about her.

Not only was her manner gruff, sharp and downright rude, it was her handling of the kitties that made me nothing short of sick. As she opened cages and carriers, she simply picked up these little darlings by the scruff of their necks and literally tossed them into these cages - no exaggeration, no mistaking. There was no kindness, no empathy, no caring, and absolutely no reassurance on her part to these cats who obviously had no idea what to make of this sudden thrust into these strange surroundings.

My immediate reaction? - was an overwhelming urge to shove her out of the way, gather all these babies up and tell hubby to make room in the back of the car because we had a few more houseguests coming to stay! What did I end up doing? - I said my goodbyes to the other lady from the rescue who was obviously deeply embarrassed by what we were witnessing, and prayed that the store and any passerby's that might be cat friendly, would somehow be able to make up for this **** of a woman that this individual was!

There was one kitty there that was SO FRIENDLY - Gary. A handsome, VERY AFFECTIONATE, black & white male who had a smudge across his nose like my Silly. I almost started to cry as I watched her yank him from his carrier, and felt even worse when I saw that he continued to rub against the bars of his new home; this cage, in the hopes that someone would pay attention to him. How I pray that a forever home comes for him soon.

I know how stressful rescue work is and I know that we all have bad days and that in store care for rescued cats is alot of work. But this woman was the epitomy of everything rotten in rescue............and if I had been someone considering becoming involved in rescue work, her behaviour would have surely made me think twice. I visited their website today when I got home and sure enough she is the President and the main contact for adoptions. I couldn't find Gary listed on their website so the picture below is of a kitty that looks similar that I found on the intranet.

As I sit here thinking about these cats, I keep telling myself that inside and warm is better than outside and cold...............or in this case, is it just trading one evil for another? I cannot stand anyone that is mean or rough with an animal; it's right up there with being mean or rough with a child - both in my books are COMPLETELY INEXCUSABLE!!!!!!!! 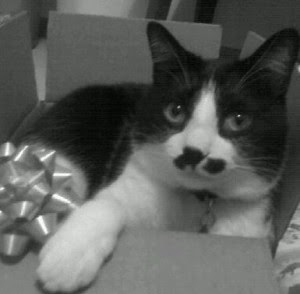