One of my neighbours called me earlier this week about a gorgeous male cat that her sister has been feeding at her home just outside Toronto. Her sister was unable to give this boy a home herself, but she was desperately trying to find a rescue that might have space to take him. He was evidently very friendly (she could pick him up), and he had been huddled on her front porch more than once during the course of the nights in recent weeks.

I named him Wilbur sight unseen, and he was brought to the Safe Haven Hotel earlier this evening for an overnight stay until he heads off to the vet tomorrow for his neuter surgery, vaccinations and checkup. He's taken over the "foster room" (sorry Flossy), and he'll return to stay with us probably on Tuesday or thereabouts, at least temporairily, until the rescue has another foster space open up to move him to.

Yeah I know, so much for the golden rule about one foster at a time but I just couldn't stand the thought of this sweet boy outside obviously wanting to come in; and our part in this wouldn't even have been possible had it not been once again for an amazing rescue that's willing to help us, help him.

This story wouldn't be complete without a snapshot - taken just moments ago. He is VERY friendly and is already purring and kneading his paws as I stroke him. His nights of trying to stay warm outside in the dead of winter are now over..........and I think he knows it. 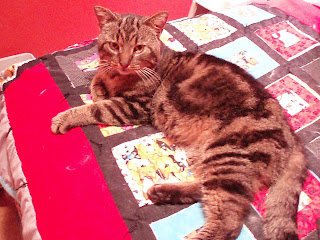