Clemson's guest room quarantine was up as of this past Saturday, and if you ask him, it wasn't a moment too soon!

Since being "released" and just as we suspected, he's been a total and utter darling. Not a hiss, not a growl, no hiding, no fear, no anxiety. Just a big stretch, and then onwards to investigate and explore. He's extremely curious and has met both the boys happily and quite matter a factly. He even got the chance to meet Pica before she went home Sunday, and although she couldn't quite believe her eyes; by Saturday night I think she realized how completely harmless Clemson was and wasn't raising nearly as much fuss as we expected with his presence.

His appearance would daunt anyone - animal or human (at least at first glance), but you quickly realize that this big boy is nothing but a total sweetiepie. He himself doesn't realize just how big he is we don't think, since he tries to get into and on top of everything that kitties half his size can easily do...............case in point, below (that's my jewellery box he's laying on top of!!!). 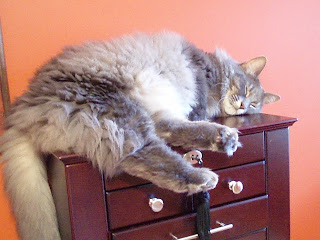 Posted by Safe Haven Hotel at 7:02 AM