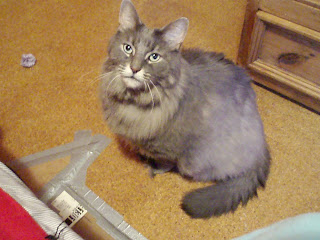 We've decided to call this boy, Clemson. We have confirmed as well that he is a Silver Maine Coon who like his fellow brothers of the same breed, can and do weigh anywhere between 9-12 kg; our boy is currently @ 9.56kg which is approximately 21 Ibs! He is not fat or appearing "sloppy" in any sense of the word; his breed are noted for being BIG kids, and he has both the body type and gigantic paws that are indicative of that. His coat is a mix of dark and light silver (absolutely gorgeous), and his tail (one that is meant for keeping them warm in winters outside), is raccoon like in appearance - also very Maine Coon. 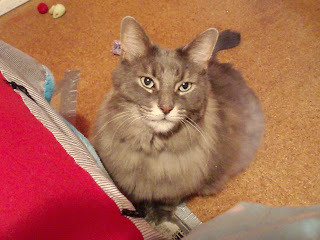 Also his behaviour is also typical of MC's - he is EXTREMELY chatty! - infact I think he talks more than I do and that's saying something!!! He's been good as gold since arriving. Abit impatient with being confined to his guest room at the present time, he requires us to visit him often in order to let him know that he hasn't been forgotten.

His size is abit daunting at first. When he comes right up to you for head butts of affection, if your laying down he does make you think to yourself that if his disposition were different and he were unpredictable behavior wise; there is alot of power there and he could really do some damage. Luckily this boy is nothing but a total gentle, sweet, loving sucky boy.............let's hope that come next Sunday when he meets the boys - they too recognize that and don't try to challenge him. The latter happening would be like Clay Aitken going up against Reuben Stoddard! *L*

PS: Our little Antoinetta was adopted today so both babies have found their forever homes. 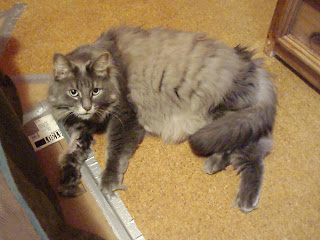