We welcomed a new guest yesterday late afternoon. Her coat and it's colours are just breathtaking to look at - at approximately 3 years of age, this gorgeous dilute torti has surely turned some male feline heads on the streets of our fair city!!

Choosing a name was pretty hard this time around because I really wanted to find something that would be unique for such a striking little girl and so we've decided upon naming her Pica (pronounced Peeka). She wasn't a favourite at the shelter due to some trust issues, which really isn't surprising given the atomosphere in those places, but when we got her home and I read her paperwork which clearly stated that she was "not a friendly cat" - I wondered for about a split second what we'd gotten outselves into which followed quite quickly by, oh well guess we'll see how this goes. *LOL*

Initially very stressed, she was hissy and swatty yesterday but already we've seen a remarkable change. She's been much more relaxed today and hasn't hissed or swatted at either myself or hubby even once all day/evening long. She loves toys and has settled into her cat bed in her guest room like it's the loveliest thing she's ever come across. Introductions with the boys will be delayed simply because she appears to stress easily and we want to give her lots of time to settle in and feel somewhat secure with us before adding anything else on top.

Let's see how the weekend unfolds. Until then, here's the first picture - not the best but at least you get the introduction and I hope to take more this weekend that will really reflect her amazing coat and colours. 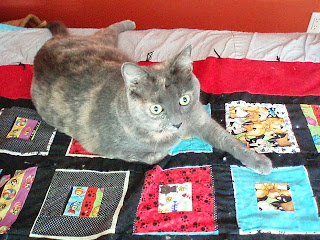