Pica is alot more receptive to attention today than she was upon her arrival last Thursday. She was very leery and nervous on Day 1 which is totally understandable, but since then we've been able to pet her a great deal, she's purred numerous times, and we've even discovered that she loves the brush.

She does still have her "nervous" moments, when either a noise or a motion frightens her and you can see that she's transitioned to high alert (as we like to call it), but she's very good about giving us subtle signs that she's not into attention in those instances, and so we've been respecting her signals and not pushing that envelope. Underneath her need to protect herself, there is a very sweet, loving kitty who melts with attention and love...........we've seen it already. She is also extremely playful, she rubs against her toys and licks them as if to give them kisses and becomes as quick as a roadrunner when the lazer pen is pulled out.

What remains to be determined is her true feelings about other cats. Initial signs are that she's not impressed with them at all, but it's too early to know if that's her defences or an honest to goodness hatred for other felines. Silly slipped into her guest room as I was trying to exit and Pica unfortunately was not happy at all - hissing, spitting and pinned back ears went into overdrive and our poor boy couldn't get out of there fast enough!

As promised, I've taken some more pictures of that beautiful coat of hers - which is really grey, cream and light brown but looks much darker in some of these shots; you'll see what I mean. 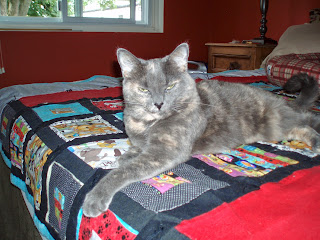 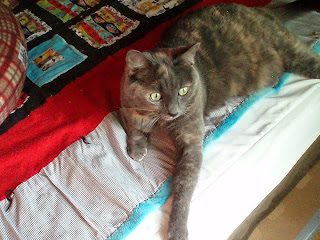 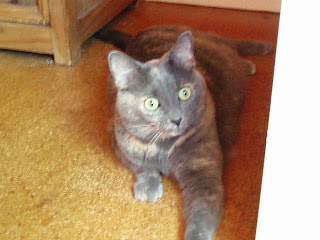