Some of you may know that last Fall I began volunteering one afternoon a week at one of the local Petsmart stores. Our rescue has some of our cats/kittens housed there, and 7 days a week, from the moment the store opens until the moment it closes, there is an army of rescue volunteers who take shifts caring for the kitties in the centre. It's a small space relative to an animal shelter, but the cats are extremely well cared for, played with, given lots of attention and affection, and are allowed to roam free until bed time each night.

Recently there was a kitty saved "Ching" - a gorgeous medium haired male who was young (maybe 1 1/2), who had previously been apart of a feral colony. Ching was just a gorgeous boy, sleek, with soulful green eyes, fur that reminded you of sleek silver, and a plumie tail that would put any long haired female to shame.

Unfortunately a few weeks ago, he became ill and long story short, the horrible decision had to be made to bid him goodbye. The result has been alot of tears on the part of the volunteers who mann this centre and who miss him terribly. There was talk of doing some sort of a fundraiser in his memory and today, I decided that I could think of no better way to honour his memory than to host such an event............and thus the BUY THE BOOK FUNDRAISER was born!

At the end of August, I'm going to host this fundraiser in my backyard. To do so, I need to collect books - ALOT of books, that are in good condition and which I can either pick up (if it's not too far), or have kind people drop off at my home. :))

So I figure that it couldn't hurt to also use the avenue of my blog to advertise in the hopes that you, lovely fellow cat lovers and faithful blog followers, will either be able to help me by either providing books of your own, or by spreading the word to friends, neighbours, co-workers and family. Location wise, I'm located in the East end of Toronto so if any of you have books, aren't able to get them to me but live in the general area, and I can come to pick them up - please don't hesitate to let me know.

In the interim, please meet the gorgeous boy in whose honour I now hope to raise funds for other rescued kitties that come after him, and who need the help (and so appreciate the love), just as much as he did. We miss you Ching and we look forward to seeing you again. 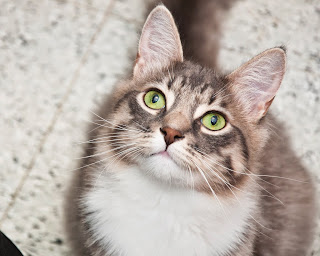