All is relatively quiet here at Safe Haven. Pica continues to do well, although it's pretty obvious at this point that she'd really be happier in a home without other kitties. Her growling and hissing at the boys now only occurs if they get too close versus everytime she even sees them, but that said, we also see how having them around keeps her on edge in a way that we know wouldn't exist if she was alone.

We marvel though at how Rocky & Silly's behaviour changes when there is a female in the house - especially one like Pica who makes it very clear at the outset that she's not fooling around. Rocky's typical M.O. of stalking, growling, and intimidation is non existent with Pica, I think he growled on Days 1& 2 and when he quickly realized she wasn't to be bullied, he did an about face and all but gave up. Now I think he's just grateful that she's not swatting at him or trying to pounce on him (which she didn't hesitate to do when he started his bossy boss routine).

Last night we watched somewhat amazed as Pica maneouvered past both boys and neither even so much as gave her a side way glance. If I didn't know better, I'd think I can hear them each take a slow intake of breath when she's that close, hoping that they don't erupt her wrath while she's near!

All in all, she's very, very sweet and her pretty factor is just off the charts. She's also quickly becoming Daddy's Girl and in typical female fashion, she has hubby wrapped right around her little paw. Me on the other hand, I'm litterbox cleaner, food feeder and brushing slave - and pretty much in that order! 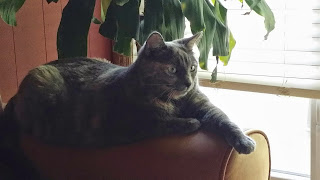 Posted by Safe Haven Hotel at 5:32 AM