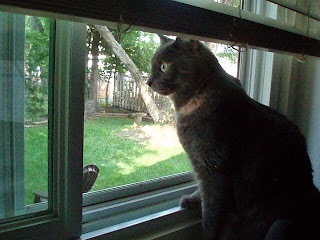 Pica has now been our guest for just over two weeks and we're still very much learning about her.

At this point, she is afraid of almost everything...........loud noises, sudden movements, toys that come at her too fast, are too colourful or too big, objects that we can be carrying (such as bedsheets in my arms which terrified her just this morning when she saw me walking with them), and even things as peculiar as my walking toward her with my spring jacket on; it was as though she didn't recognize me and had this look on her face like I was coming to do her serious harm. The one big though is when petting her if your hand or arm finds it's way in front of her face - she will swat out and cry as as if to say, get away from me. She also has to be petted very slowly, which she loves but any change of position or increase in pressure or speed, and she's cowering once again and making it clear she doesn't enjoy it.

All that said, she is still making progress with her trust for affection, and has even crawled up on hubby's lap twice for petting, as well as tapping him on the knee and rubbing up against him to indicate she'd like some love - so we're hopeful. We can only imagine the abuse she has very obviously suffered at the hands of others, and how long it went on for is anyone's guess. What that really means then is that what was horrible for her to endure will take time for her to get over and the reality is that she may always be abit nervous.

Two weeks together is hardly enough time for a kitty with these types of issues to be resolved, but we're so thankful that we were able to rescue her from the shelter because that environment would have never been condusive to even remote attempts at helping her to trust again. She has been placed on the rescue's website for adoption but with clear stipulations that she needs a home without other pets, no small children and that is quiet. We've also been clear about her need to settle into her forever home at her own pace...........

We've already grown to be really fond of her and as always, will keep her safe until the right family comes to offer her, her 2nd chance.

Posted by Safe Haven Hotel at 7:13 AM