"ROUND TWO" OF MAGNUM & MEDS

We got some great suggestions (thanks everyone!!), of ways in which to get around Magnum's hostility of being pilled. We arrived home last night from work with arsenal's in hand........a big blanket, pill pockets and REALLY yummy wet food. We did not wish a repeat of Evil Magnum that we were introduced to yesterday morning - this isn't him actually, but you get the idea. 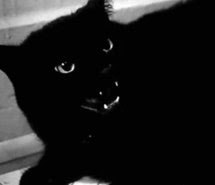 Pill pockets were up first. He loved them.......except that he decided that the ones without the pills were far yummier than the ones with. We tried that twice, 2nd attempt went much like the first; he was thoroughly enjoying snacking on them but he was not going to be fooled into eating the ones with the pills in them.

Next up, we tried wrapping him in the large blanket tightly in order that we could keep his feet out of the issue, and hopefully quickly pry open his mouth to drop pills in lightening fast. Again, twice we tried and twice, believe it or not, he broke out of the blanket (or at least one of his front paws did), both times he swatted the pill right out of my hand and clear across the room!

So we opted for the last resort. Crushed the pills down to powder in wet food and presented as a very tasty treat. He ate every last morsel :))

In hindsight I don't think it was Magnum making this a difficult situation at all - rather it was US creating issues where there didn't need to be any. In the end, he kind of looked up at me after eating as if to say, "You should have went that way to start".