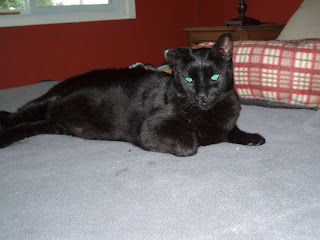 We've decided to call our new friend, Magnum.  After almost 48 hours of getting to know one another, we thought this was a pretty fitting name for one amazing cat.

Every time I'm around him, the only word that keeps popping into my head is resilient.  Estimates are that he is somewhere in the neighbourhood of 6-9 years of age, and in a four week span of time, he's gone from being picked up by Animal Control, to sitting on death row of a shelter (where he spent the majority of his time), to then being transported to a vet for examination, then picked up again and brought into Toronto, than took another 1 hour journey with us to reach our home.  He's gone from a home to the streets, to a shelter, to another home.............and this is for a boy who is abit older, abit wiser, and judging by his one horribly crinkled ear due to extreme weather exposure, had already been through some very unpleasant stuff.

But at the end of the day, we are still seeing one very loving, affectionate, easy going kitty - even after all of that.  We let him out earlier today so that he could have an opportunity to scope out the whole house while our own boys could watch but not participate.  Magnum made two walkabouts and then suddenly walked into the kitchen, laid down on the floor and began purring; his expression being one of, "Okay, this will do nicely". 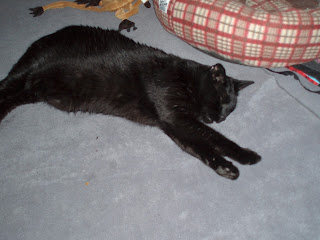