DO MY EYES DECEIVE???

I opened up the shower curtain this morning to this and wondered for about a split second if perhaps I was in the wrong house! 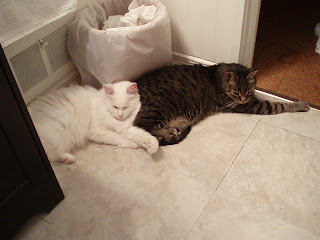 To some this might not seem like such a big deal, Rocky allowing Flossy to lean on him (almost to the point of cuddling)........but to others (and especially to me who knows him better than anyone), it's a VERY BIG DEAL. He doesn't have nicknames like Stinkerboy and Rotten Rock for nothing; and I have NEVER seen him allow another cat (not even his brother Silly) to do this.

But before you or I get too excited about what might appear to be a softer side finally emerging in our little crankmeister, I should be sure to mention that infact Rocky's favourite place every morning as I get ready for work is in front of the heat register in the bathroom and that just happens to be the exact spot that Flossy beat him to this morning. He had already hissed and growled at her when he came upon her there initially, so I would safely assume that this spot he took up..........was only to ensure that once she removed her prissy little self, he could assume control and his territory in one swift motion!
Posted by Safe Haven Hotel at 2:05 PM