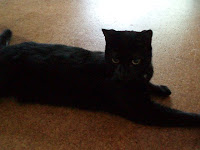 I've put off doing another entry simply because I didn't think I had anything noteworthy to report - that was until someone else helped me to see that was actually to the contrary. I had been asked recently about fostering, more specifically, what kind of a "time committment" is required when taking in a rescued cat/kitten............

At first I was completely enthusiastic, not only because I was talking about something that I absolutely love, but because I thought these initial questions were due to someone's interest in perhaps becoming a foster parent themselves. I wanted to rush past the initial stuff just so I could get to the good part...........the part about the excitement and anticipation that comes with welcoming in a new cat or kitten, the thrill of watching them experience freedom of movement outside of a tiny metal cage or a carrier for what could be the first time in weeks or months, and the pure joy of seeing the display of thankfulness on their tiny faces as they purr and become more and more relaxed; - but unfortunately, I didn't get to the "good part"

The someone enquiring gave me a reply of one sentence that left me with no doubt in my mind whatsoever, that we weren't going to get to the good part - that one sentence went like this "How could you take in a strange animal for an unspecified amount of time, not knowing when you'll be rid of it - why your practically raising that black cat you have."

Well, yes, come to think of it, if you put it like that - I guess, we are raising Rascal. And if raising him means that I get to keep him from falling into the hands of someone that won't love, adore and appreciate him for the wonderful kitty that he is..........................well then we'll be raising him right through adolescence, adulthood, and into his golden years - at least that way I can ensure he never has words like "It" and "Rid" in the same sentence as him.
Posted by Safe Haven Hotel at 5:29 PM