WHAT'S IN A CARRIER?

I'm reflecting again tonight on the incredible importance that rescue groups (such as the one that my husband and I volunteer with), have and I know that I've written about that importance here before, but I feel strongly enough about it, that I'm going to write about it again tonight.

Constantly I run into or hear through email, from people who are full of praise and kind words for those of us involved in rescue work - specifically for those of us who go into the hell holes called shelters and other such places to actually pluck the cats and kittens from the worst fate imaginable, and for those of us who open up our homes and (our lives), to offer these same little beings, a safe refuge until an amazing thing called adoption can happen to them. That's wonderful, and the praise and thankfulness that people express is not lost on me or on other rescue workers.........but what is lost on me is those same people who then in the next breath say "But I could never do what you do"; followed closely by the infamous mound of reasonings, "My cat/s would never accept another animal", "I don't have the funds to take care of an animal", "I don't have the time to dedicate", (or my all time favourite).........."I would become too attached and want to keep them all".

Do any of those people even begin to realize I wonder, that there's not one of those same reasons that each person who is actively involved in rescue couldn't use to stop him or herself from being involved? Do they think that WE don't get attached, that WE don't struggle with feelings of guilt about if every animal in our home is getting his/her fair share of attention due to 1 kitty more that needs a safe place to stay more than we need for a carefree conscious, do they think that WE don't want to keep every single one of those that passes over the threshold of our front door and becomes (for a time), as much ours as our own are?
The point here is that the answer to all those reasons/excuses/explanations/ is a resounding YES, YES, YES!!!!! But instead of walking away, volunteers in rescue groups the world over put their own fears, worries, concerns and yes (selfishness) - there I said it, on the very back burner and they step up to the plate to help.

What you will find if you look close enough, is that inside every carrier is a life. One that is wishing for kindness, wishing for tenderness, wishing for compassion, and yes, wishing for LOVE. Isn't that what all of God's creatures are searching for on this journey called life? How I pray that there will come a day when more people will stop to see what's really in a carrier...............

**In loving memory of my peanut and babygirl, "Miss Remy" - who was and always will be my little pearl inside a carrier** 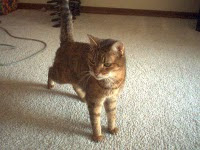