THE FIRE OF A REDHEAD 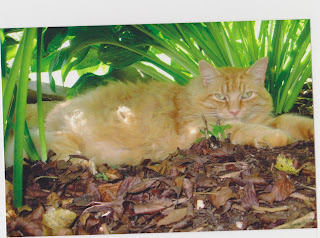 Allow me to present Connor (aka "Seymour")........there is just no denying that THIS is one handsome cat! I'm convinced that he's right up there with Clooney, Pitt and Connery (although I'll admit that the first two have never done much to rock my personal world).

Connor was a foster that stayed with us for a short time before being adopted by the most incredible couple. Truly, if there are those "golden" adopters, C&R are at the top of that category. They even provided a vet reference at the outset which was of course, completely glowing in nature!

Connor has been with them afew years now and his life includes not only access to the beautiful outdoors on their property north of the city (where they keep very close eye on their kitties and ensure everyone is in by 8:00pm in the evenings), but he also lives in the lap of luxury because he gets to vacation his winters away at their Florida home, where he is once again allowed to enjoy the grounds, but of course under supervision as well.

He is the alpha male in their home - no big surprise there I'm sure right?; but in addition he is one VERY spoiled alpha male - he rules the roost and makes no bones about who is boss. If you've ever heard the expression, It's My Way Or The Highway........well Connor lives by that and he expects everyone else that he graces with his presence to know it and never forget it! *L* I think his strong personality (as I lovingly refer to it), is due to his orange genes. I've written before about my love for orange & white kitties (the creamsicle lot as I call them), but pure orange boys (and orange cats are predominantly always male), have a very "unique" (if I can use that word) way about them.

They tend to be as hot tempered, and unpredictable as their human counterparts and Connor is no exception. He loves C&R completely, but he also reminds them on a pretty constant basis that he considers himself The King, he allows them to enjoy his company, and if ever they should decide to change things NOT to his liking, he won't hesitate for one second to let them know about it!!

I call them Redheads because that's exactly what they are and they have the fire to prove it. Regardless, Connor and his family love each other completely and it warms the hearts of me and my husband every time we hear about his latest adventures. He is loved, spoiled and catered to beyond measure.............. and wouldn't you agree with Connor, that that is EXACTLY as it should be!
Posted by Safe Haven Hotel at 1:35 PM