A couple of more weeks and it will be September. It's hard to believe that another Summer is almost behind us and soon it will be back to umbrella's, sweaters and ultimately, winter coats......... (uh, don't you just hate those last two words?).

Over the course of the Summer, Rascal has found his place within our family and has even managed (dare I write it), to win over Rocky aka, Stinkerboy, to a large degree. You know a foster has been with us for quite some time when Rocky stops growling all together when they stroll by, one of the last intimidation methods he holds onto - almost as if to convince himself that if he holds out long enough, he can once again do his "happy dance" sooner rather than later. That's his seeing the back end of yet another kitty as they too are carried out the front door to their forever home; it beats out by far, lazy lounge filled days on our bed, his favourite snack, and Christmas morning (when he gets to find his favourite piece of wrapping paper which he proceeds to lay on all day) all in one!

As my own personal test when thinking about how long a foster has been with us, I get up my courage and ultimately do the "name game". Unless a foster comes to us as an owner surrender, rescuing from a high volume shelter means that the names they are given are usually dictated by staff for identification purposes. As if sitting on death row at a shelter wasn't enough, these poor little creatures also find themselves losing the last little shred of who they were - with homelessness, comes no identity.

We try to find names that suite our houseguests, but because noone is usually with us very long, it's never one they recognize and that for us is the time metre we use to gage how long our latest friend has waited for their forever home. They don't know their name = So they haven't waited that long for a forever home = Noone has become overly attached to anyone else just YET.

The other morning when I was almost done preparing to leave for work, I made my way to the basement to clean litterboxes, found my courage somewhere between the bag and the scooper, and I called Rascal. Not with cute sounds or other such noises, but by actually using his name. Two calls of "Rascal, Raaaaascal" - and he came running; tail high as a kite, eyes as a big as smarties, ears perked up and ready................he knows his name. 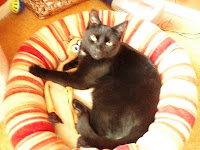 When his forever family comes, I hope they like the name Rascal......and I also hope that they won't think the tears I'll inevitably shed as the journey with his new family begins, will be strange.
Posted by Safe Haven Hotel at 3:52 PM