ONE BIG DOSE OF TLC

Our new foster "Mikey" arrived last night. At the risk of offending someone, can I just say how much I HATE that name for a cat! It's not just that I personally am not into people names for animals, but also that if ever there was a cat who DID NOT look like a Mikey, it's this boy.

Approx 8-10 years old, he was dumped at the shelter by his owner with his sister Shadow. They were terrified and so our rescue stepped in to save them, the only problem being that no one foster home could take them both, so in addition to being dumped by their family, both having to endure dental surgery (Mikey has had somewhere in the neighbourhood of 6-9 teeth taken out!),they've also had to be separated.

Does this truly suck or what?! To add insult to injury, Mikey is now in the full throes of a URI, and is drooling and sneezing violently as I type. I pray that his appetite doesn't buckle under all of this because the last thing I want to be doing to this sweetheart is force feeding.

Since arriving, he's been terrified. Hiding in the corner of his guest room with his face pressed up against the wall, it was the most pitiful sight I had ever seen. Some coaxing has helped him to get up on the bed, but quite honestly, my heart just breaks for him as he tries to figure out what the heck is going on.

So here he is.............a GORGEOUS long haired, freckle infused (he has lots of them), orange boy who loves brushing, petting, resting his head on your knee, and laying on his side while you rub his tummy.

Thank goodness for cat rescues, for shelter staff who care, for drivers and rescue coordinators who ban together - but most of all, thank goodness for people who still care because if ever there was a kitty that needed to be reassured and coddled; it's our Mikey. 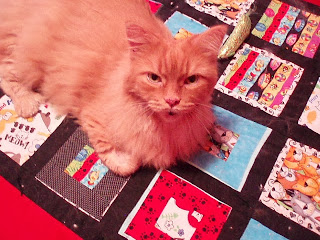 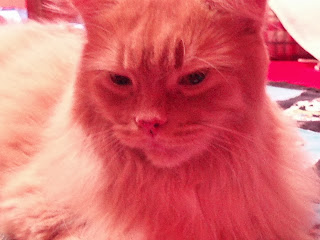