I know that I rave, rave, rave about what awesome kitties our fosters are; and at times I'm sure I sound like a broken record. But it is totally true, and once again it's proven without a doubt as Barnaby has gone on to his forever home, and it would appear, is working nicely towards winning over the ladies in his kingdom.

AM has been kind enough to keep me updated (not really like she had any other choice - *LOL*) on how things went once Barnaby was home and was introduced to the resident female, Princess. The first couple of days were somewhat rocky but what good start isn't? Anyway, like they say, anything worth having is worth waiting for and Barnaby appears to posess oodles of patience because I'm sure in his mind's eye it wasn't "if" Princess became entranced with his good looks and adorable personality, but simply rather a matter of "when".

Here's affirmation of that very fact by AM herself:

I just wanted to give you a quick update about Barnaby. He is such a wonderful, sweet little guy, with an outgoing personality. When he’s not chasing the laser pen or playing with his toys, you can find him cuddled up with his new mom – and I love it! He’s explored every single corner of the house and acts like he’s eight months old, not eight years! I am so happy to have him in my life.

And while his new sister Princess hasn’t been quite so quick to warm up to him, Barnaby assures me that he’ll have her eating out his paw soon! 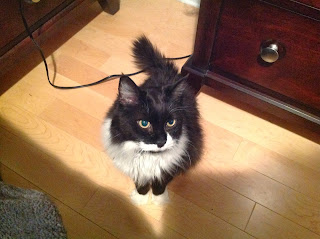 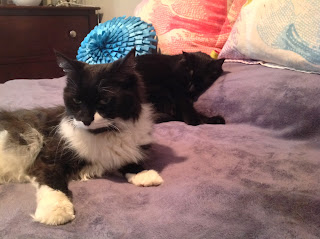 And here's the real SEAL THE DEAL if ever there was one!!!