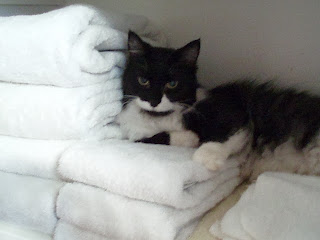 Barnaby is settling in so well! Only two days after arriving, he's been introduced to the boys and has done amazingly ............very calm and laid back; more interested in resting and being loved than getting into any confrontations.

I've discovered that he does actually loved to be brushed. I brought out the magical little instrument and much to my surprise (and delight), he climbed right into my lap as if to say: "Well, go ahead I love to be groomed". It was so endearing and obviously at some point in his life he had someone that cared enough about him to do this in a very non-threatening and gentle manner. His coat will need afew sessions to bring it back to it's full beauty - not sure if the current state of it is due to his having been dumped outside, his previous living conditions, or if it's been all the stress he's gone through as of late that led to disregarding it himself. Regardless, we'll have it gleaming in no time - he has such gorgeous markings and it's a beautiful length - abit of TLC and it'll be stunning once again.

He has had some mouth extractions and currently has a sore paw pad since the vet clipped off abit of callous that was forming and in the process, it's hurting him. He's missing both upper canines so it's taking abit of getting used to it would appear in chewing once again and having his remaining teeth sit properly without the others there. It isn't affecting his eating persay, more just a case of him acting sometimes like there's something caught in there (there isn't - I've checked numerous times). These things just make us feel more protective and loving towards him...........the nursing care here is our speciality, so hopefully he's feeling fit as a fiddle in no time.

Otherwise, he's been as good as gold. I woke up in the night to find him on Rocky's pillow above my head (sans Rocky of course), who got up shortly thereafter and was not impressed to find this new guy in his spot. Than later he settled farther down the bed and this morning, decided to wake me by sitting on my chest. He's so gentle and mild mannered - we're hopeful that someone will seem him for the sweet, sweet fella he is and offer him a much deserved 2nd chance.

A trusting little soul that despite being treated so horribly, hasn't given up on us humans. 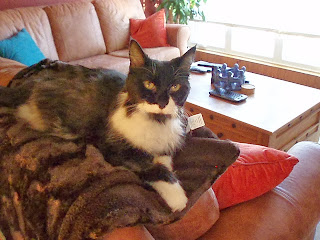 Posted by Safe Haven Hotel at 9:25 AM