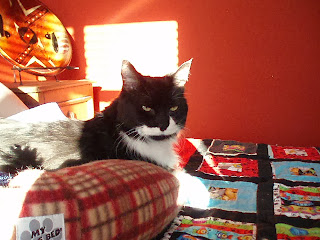 We finally have a new houseguest at Safe Haven - he just arrived about an hour ago and I'm ashamed to admit that I'm already in love!

Barnaby is a gorgeous medium haired, black & white senior gentleman (he's 8 years old), who was found in a box outside in mid December. May the person/s who put him there have deep shame - who does such a thing in the dead of winter and ESPECIALLY to an older cat?!

It never ceases to amaze me how one can be treated so cruelly and yet still maintain their sense of forgiveness. Barnaby has been a little dream already, friendly and affectionate; he's eaten Temptations treats right out of my hand and is now sunning himself in his new pet bed (which he loves). I even pulled out the infamous brush, (more to see his reaction than anything), and wouldn't you know that he became quite interested and even rolled over on his side so I could do his belly. If that isn't a forgiving animal than I don't know what one is.

A beautiful cat inside and out. We'll give him a night or two to settle in and then let him meet the boys. Again, my heart is filled with gratitude that the way has been paved for us to help him. Earlier this week, I was feeling a little discouraged as our home had been broken into for the 2nd time in 3 years; now I'm once again refocused on what's most important.............ensuring this darling boy gets his 2nd chance.

I'll write again in a little while to let everyone know how we're doing.