This morning's post has nothing to do with a rescued kitty or fostering, but for all of you who may stop by to read, this is just as important to me...............

Today marks 1 year ago exactly on which my little sister died at 2:32am after an eight month battle with cancer - she was 38.  For anyone who like me, has continued to live on after such a tragedy, you will know what I mean when I say that the last 12 months have been so short and yet so long.

This is one of the ways I wish to show that she's not forgotten.  The picture below is the only one I have of her.  I took it the day we went to pick her out a wig shortly after she had started chemotherapy.  She loved it instantly and although she was somewhat shy about having her picture taken moments after she'd put it on, I'm so thankful that I captured such a bitter sweet memory. 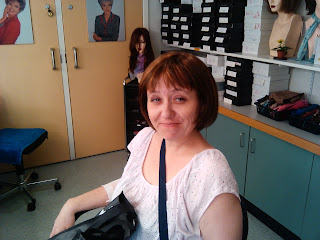 Posted by Safe Haven Hotel at 2:36 AM