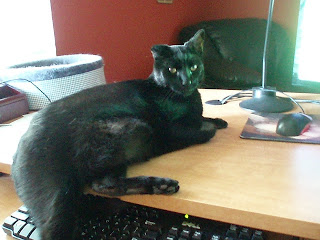 Does Magnum appear to have that look of,  "I'm not worried in the slightest about getting adopted."

Well he should because as of two hours ago, he now has his forever home!  Friends of ours were over on Sunday, and loved him to bits.   They already have a kitty, a gorgeous little Russian Blue female named Holly who is just the apple of Mommy's eye (and their 11 year old son), but when they expressed interest in him I thought it was more of a wish than an actual legitimate enquiry, so I didn't really think much more about it.

That was of course until I got the email earlier today where Mommy indicated that they had talked it over as a family and decided that they wanted to adopt Magnum! He will be with us until closer to the end of othe month because they are about to embark on a week's holiday and we all decided it would be better to take him home after they get back.

Soooooooooo we get to love him abit longer but really, to think 4 weeks ago he was in a cage at Animal Control and now.................well now, he has a new feline sister, and a family that will adore him forever!