WHEN RIGHT IS RIGHT

What can I say, except that I was smitten with him and his girlfriend who accompanied him, almost instantly. They are a young couple, serious animal lovers, and they were so thrilled with Addy the moment they laid eyes on her! For Addy's part, she was very friendly with them, came down to greet them, even rubbed against her potential new Dad's leg once or twice. He shared pictures of his home (a gorgeous looking loft in the city's west end), and we went over everything related to Miss Addy in fine detail.

If ever there was a meeting that screamed PROCEED - it was this one. I think that our little darling is going to be so well cared for and fussed over (even her new Dad's parents are anxiously awaiting her arrival), and I know that having her own space without the presence of other cats to worry about is going to make her so happy.

We'll keep in touch over the coming days so that I can know she's settling in nicely and all is well; but we are really so very thrilled with this adoption...............oh and Miss Addy just as I had hoped, let me know in her own way that she was more than ready to head home. 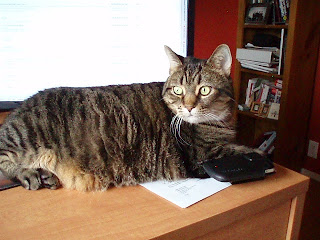 Posted by Safe Haven Hotel at 9:37 AM