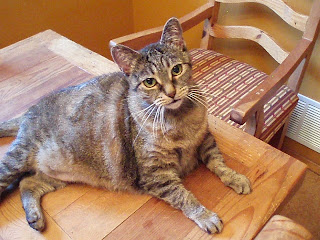 Cocoa is doing wonderfully! She spends a great amount of time with us and if she isn't sitting next to us, she's not very far off. Her appetite is great, her litterbox habits are perfect, and her disposition is becoming sweeter and sweeter by the day. The last few nights she's decided that sleeping with us is a swell idea (although she doesn't stay all night), and has even begun to take Rocky's perturbed attitude in stride; preferring to give him a little hiss in return for his growls and then she simply just saunters off like the typical female she is..............as if to say, oh poohey on you!

I have discovered in the past few days that she has had a series of scabs on her back and some on the tips of her ears. The back appears to be drying up and thus, clearing up but the ears I'm watching more closely. I suspect it may have been some type of allergy to the food she was being fed previously OR it may have been stress related. She's been scratching her ears quite abit but a further investigation inside doesn't show anything obvious that could be wrong. I put abit of neosporin on the inflamed area's that are on the outside and will keep an eye. If need be we can switch her to a hypo allergenic food if it's required, but since the back appears to be clearing up, I'm hoping that the ears will follow suite.

She is just a sweetheart of a little thing and so well behaved. She's settled in and that can only mean that adoption calls are right around the corner.