WHAT LIFE HAS TO OFFER

I'm going to apologize in advance for the tone of this post. If it resonates confusion and frustration it's because those are the two paramount feelings we're having right now where our little Flossy is concerned.

We learned last Thursday that Flossy was again eating on her own at the vet clinic despite her feeding tube (which had to be inserted after her surgery since she didn't eat right away at that point and they were concerned that not too much time elapse with that being the case), and that we could pick her up that evening.

We were so happy to bring her home and she looked physically ALOT better, her eyes were brighter and she seemed very glad to be home; rubbing up against us and purring up a storm! We had also purchased a high calorie wet food (since she cannot have dry now for a few weeks while her mouth heals) so that we could have her continue on the road to healing with the right diet and hopefully also assist her in putting some weight on.

That's the brightest point - the low points have come in many forms since that evening. Firstly we discovered that she hated the vet food and absolutely would not eat it, so after 24 hours of trying to convince her otherwise, we returned that and purchased another brand that we hoped she would eat. That too was met with distaste and no interest, and so we resorted to Friskies - the junk of all junk cat food. Well she loves Friskies but ONLY the patte kind, and with absolutely nothing healthy mixed in. I think I've thrown out more cat food in the last 3 days than I have in all the years I've been fostering.
Added to that is the fact that neither of us have seen her drink a drop of water since arriving and any attempts to force water into her is HIGH STRESS and even HIGHER DRAMA! We end up soaking ourselves, her blankets and even her little frame as she fights and resists and water is everywhere except where it's supposed to be.
Due to her feeding tube, she came home with literally an uncovered hole in her neck where it had been inserted. Afew hours after she arrived it began to seep clear liquid and I found myself with just one more thing to worry about - was it safe, was it not, was it going to become infected, was this normal, was it not????? It seems to have stopped seeping now but not before it turned the one side of her coat a crusty mess and all attempts to brush it are also not met with a positive reception.
Lastly, we are also experiencing another new thing - when she purrs very hard, she begins to almost choke and gag; as if she's trying to dispel a hairball that is never coming. It appears to alarm her when it happens and even the affection that is probably the only thing she has loved, is now a source of anxiety as she has these episiodes.

But the saddest thing of all is her demeanour once again. She is withdrawn, seeking out places to sleep constantly that are in area's where noone can bother her - case in point.......the picture below. 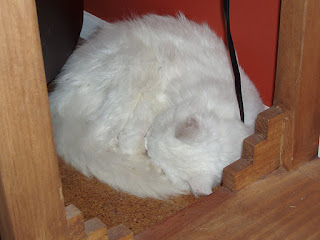 We have left Flossy's bedroom door open since yesterday in the hopes that it would help her begin coming out of her shell. All it appears to have done is lead her to find new area's to withdraw to. In this photo she is wedged between a chair and a end table in our home office - on the floor.
She does not seek out attention or contact - if you pet her she will purr and loves it, but no sooner is she moving away and recoiling into herself. She becomes terrified if you try to handle her and will only then return to a place where you cannot get to her; and always with her back to a wall.

Flossy was brought inside approximately 4 weeks ago. Is she happy, sad, indifferent, I honestly cannot tell. She is our 58th foster and by far, she is probably the hardest one we've ever worked with. What does the future hold for this little girl, I don't know and what's worse, I don't know that she even cares.
Posted by Safe Haven Hotel at 1:14 PM