Flossy is doing a thousand times better physically! She still has very mild symptoms of her past URI but it's almost entirely cleared up and she looks great. Her appetite has returned and she's even begun eating hard food (with a little wet mixed in to satisfy her "lady" tastes). Her coat has become incredibly lush and thick and she spends hours every day grooming herself from one end to the other!! She eats in the kitchen now with Silly & Rocky and has full run of the house; she is still very shy with us, but each day she seems to gain a little more confidance and courage than the day before, and instead of hiding up in the spare room, she's usually downstairs now either under the coffee table or laying on the floor beside our loveseat. However, she has also found a very special place that she really likes to have her mid afternoon snoozes........... 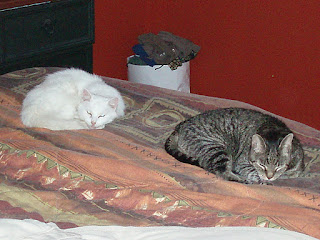 Yes you are seeing correctly - our Flossy girl not only seems to really like the company of other cats, she's taken a real shine to our ornery Rocky. The other morning I caught her trying to rub up against him - well you can imagine how that went over! She makes these adorable little "trilling" sounds when she approaches him, and even though his hisses blow back the fur on her face and practically knock her tiny little frame over, she just happily strolls by completely unfazed.

I caught her kissing Silly the other morning as well (cheeky miss) and it's very evident that their company is helping to bring her out of her shell and settle in a little more. We've decided to wait abit longer before putting her pics and write up on the website - she's still too shy with people and we're hoping that given abit more time she'll emerge a little more and not coil back so much from noises and us in general.

She's come a loooooooong way - we're very proud of her and she's going to make someone a lovely little friend when the time comes.
Posted by Safe Haven Hotel at 2:29 AM