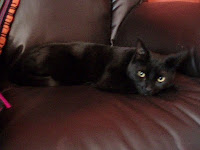 Well, now that Maxwell has found his wonderful forever home, this is what greets us on a daily basis - and Rascal was his name. It was my husband that baptized this little guy, and where he would normally agonize over a new name for a foster for hours and sometimes even days, this one seem to come in record time - not even 30 mins after the little black beauty had arrived!

He made strange for all of 20 mins after being shown the guest room, ever since then, he's tore through the place at lightening fast speeds, zoomed from one piece of furniture to the next, whipped down hallways and around corners, and upset everything in a his path much like a bull in a china shop! He's sassy, brimming with mischief and as cocky and devilish as any male that's just turned 2.
He's like the whirlwind that wips through your home and leaves you wondering if you really did just see a little black cat - he's been so spunky and quick, trying to hold him is like attempting to master one of those slinky toys from the early 70's (remember those beauties)......

As if his high energy wasn't enough to just sit back and watch, he's giving both Silly & Rocky a run for their fur. He's already tried to use both their backs as space ships, has decided that their tails make good dualling instruments, and thinks chasing them at full speed is even more fun when they flop down from exhaustion at not being able to outrun him, and he can then pounce on them some more when they're totally vulnerable. :))

Then in the middle of the night if I wake up and look around.........there he is........curled up in a little ball above my head, purring everso softly, sound asleep in little boy land.

He's a monkey and our baby, all rolled into one.
Posted by Safe Haven Hotel at 6:10 PM