GOODBYE IS THE HARDEST WORD 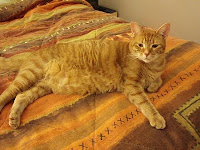 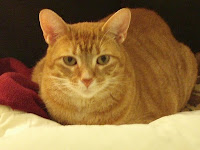 If having to prepare myself for farewell scene's with fosters whose forever families have found them is difficult, the only thing in fostering that I can say surpasses that in terms of heartwrenching, is when those same forever families inform me that their adopted baby has passed away very unexpectedly.

Noah was nothing short of a treasure. Having been found tied to a tree with a note around his neck that simply read: "His name is Noah" - you would think that this crimson coloured boy would have major trust issues; but that's the beauty of animals - they are so much more forgiving than us humans.

We didn't foster Noah that long but he was one of the one's that instantly became my boy - he loved to sleep with me, was a real snuggler and just a sweetheart. When a lovely couple came searching for a new friend for their female kitty at home who had recently lost her male counterpart, Noah was a perfect fit. He was patient and loving and kind and adorable - he treated his female roommate as though she were a Queen and he was her loyal subject. His new family grew to love him and there seemed to be another happy ending............

Sadly, I received word yesterday that Noah had taken sick and that exactly what was ailing him seemed somewhat of a mystery. The hope was that whatever was bothering him would pass, and that he would resume his wonderful, disposition and self. Hoping for the best is important, but when things take a sudden turn for the worse and suddenly you find yourself facing a situation you never dreamed would occur so out of the blue, you realize once again the fragility of life itself and how quickly it can be taken. Noah's forever family had to make the gut wrenching decision to bid him goodbye this weekend - only 6 months after adopting him.

As I look back over his pictures and the notes I made in my fostering scrapbook after he'd been adopted, I am reminded of just what an amazing boy he was. I am deeply saddened that we have lost him, but I try to remind myself that this precious animal could have died, alone, in a cold metal cage, with his last memories having been of that tree and the person who abandoned him there. Instead, he was treated with love and compassion and had 6 months worth of memories that will include among others, his little friend "Tifah" who now misses him desperately.

Goodbye sweet Noah - we love you, we miss you, and we look forward to seeing you again some day not that far away...........until then, rest well at the Rainbow Bridge.
Posted by Safe Haven Hotel at 1:24 PM