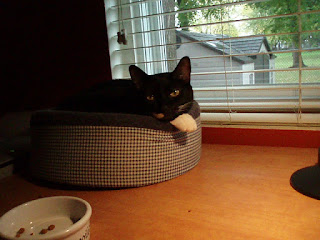 So far there have been three enquiries for Hogan - not bad at all considering he's been with us a month exactly this coming Wedneday. The first actually ended up adopting elsewhere, the second was initial excitement that wained, and the third remains to be seen. This one is a young couple who are preparing to be married and have fallen madly in love with Hogan via his pictures, his bio write up, and the brief discussion we've had over the phone. The concern for me is that they are planning on children in their future, and although we cannot say with any degree of certainty that children was the trigger in Hogan's former family that resulted in his inappropriate litterbox usage, it certainly couldn't have helped. I've been completely honest with them about why he was surrendered and how wonderfully he has done here litterbox wise despite sharing his space with other cats. They are both currently travelling on business and won't be available to meet him for another week or thereabouts so I've suggested we all think about it and if they still feel as strongly about him when they've had time to ponder, I've indicated they are welcome to call us again and we'll set up a time for them to meet him.

Our current feeling is to stand firm on the no kids, no dogs and no cats in his new home. This is where the foster parent's responsbility comes into play.............it's his happiness and setting him up for success that is foremost in our minds. Quite honestly, this couple will be able to find another kitty that will tolerate their lifestyle choices, but Hogan, he cannot make those choices for himself and is at the mercy of whomever's hands he lands in. There are no guarantees at any time, but we must do our best to protect and help those who come into our care - and oftentimes that can mean saying no to good when you know you need great. 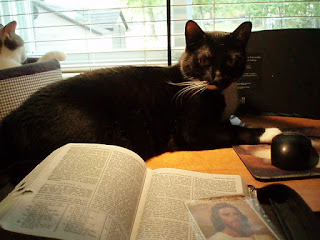 Posted by Safe Haven Hotel at 9:00 AM