WORK TO BE DONE 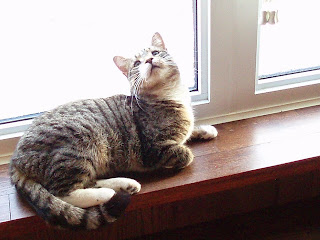 It was three weeks ago yesterday since Fisher has arrived. We're making small baby steps of progress but he's still very easily frightened, nervous a great deal of the time, and very unsure.

The good news is that he's graduated from behind our livingroom couch to a cat bed that sits in our bedroom. At first he would only get into the cat bed if we weren't home (we'd catch him jumping out of it when we came in), or when we both went to bed. But he's gained abit more courage with us as now he spends a great deal of time in it and is happy to do so when one or both of us are in the bedroom either reading or watching t.v.

He also loves the multitude of cat toys strewn throughout the house and can often be heard playing up a storm at night once we've gone to bed. Then there's the front livingroom window (which he enjoys sitting in), AND the fact that he will now come when treats are being handed out! All encouraging signs except for............the fact that he's attacked me twice since arriving.

The first time was while he was sick and with a fever, but he bit me very hard, into the muscle in my hand and it's one of those not soon forgotten. The second time was about a week later when he was feeling physically all better and we were having a petting session but he got spooked by the motion of my hand I think and lunged at me (thankfully no teeth this time). Both incidences have left me very leery of him, moreso than I've been with a previous foster cat for a very long, long time. He gives all the signs of wanting more attention and affection but he startles easily and that in turn has me startled, and then, well then you just have two very nervous beings trying to figure out whose more scared of who. He's been good as gold with Steve but ironically he seems more scared of him than he is me, so Steve doesn't have as many chances to pet him.

Otherwise he's no trouble at all - hopefully we can find common ground where we can all relax and enjoy being together. 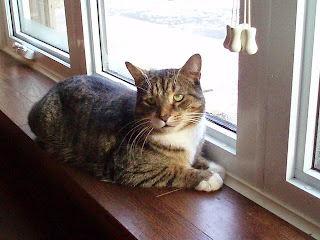