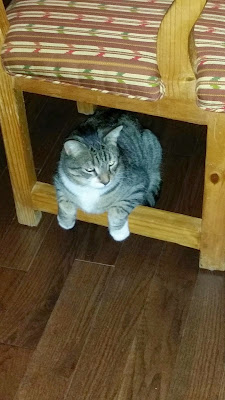 Here we are about six weeks later - give or take a week or two (I don't have my daytimer in front of me, and Fisher is doing okay. Like alot of the male species, he's not shy when it comes to food time, or treats time for that matter. He'll fearlessly venture out for both and now has become such a lover of the Temptations variety of goodies, that he'll actually tag team with our Silly to see who can convince Mom with pitiful little meows and those big sad eyes, to see which ones gets me to buckle first! *sneaky devils*

Without a doubt he's made alot of progress in terms of his comfort level in the house and he's also begun playing tag with Silly, all good signs. Steve and I can both pet him alot more now but he remains quite fearful of sudden movement and especially if there's any kind of raised voice. He retreats to his safety zone (which happens to be a little cat bed he's taken over on our bedroom floor), and it's there you'll find him if he's feeling at all unsure. He enjoys his toys but prefers to entertain himself with them, and attempts by us to play with him has him quite fearful; I guess it's the whole idea of something coming toward him that he's not ready for.

His meow, chipmunk cheeks, and candy cane tail are all so endearing. Behaviour wise toward our boys he is as good as can be, has perfect litterbox habits and is absolutely the best houseguest. He may never be a lap cat or a cuddler, but then again a year from now he could also make a complete liar out of me.
Posted by Safe Haven Hotel at 3:01 PM