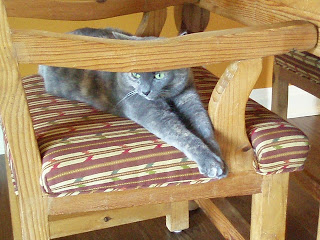 Sunday was abit of a stressful day for Pica - I woke up to find her acting very strangely - seemingly like she had ants in her pants (for lack of a better expression). She'd settle down somewhere only to jump up afew seconds later like she'd be stung by something or bit.........she'd then take off scurrying through the house. This went on for most of the morning before we finally caught her scooting her bum across the floor.

We suspected her anal glands had become impacted (scooting is dead giveaway for this problem), and called the rescue which were so great about getting us an appointment with one of the vets they use straightaway. A half hour later, Pica had been seen and yes it was her glands, they been expressed. and she was headed back home. Ever since returning, she's been very clingy with hubby who took her to her appointment. Not sure what she made of the car ride or the vet himself who was evidently super nice, but I think it was enough of a flashback to her shelter stay that she became somewhat anxious, almost as if she thought she was being dumped somewhere again.

We're glad she's okay even if Rocky is giving her an extra hard time - I think his happy dance had started when she disappeared for abit on Sunday afternoon and he was completely furious when he realized her return. Still no adoption calls but sometimes kitties that need to go to a home alone with no other pets are abit harder to place simply because alot of cat lovers have more than one. Her time will come we're sure, we'll just keep loving her until then. 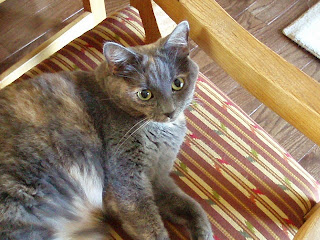 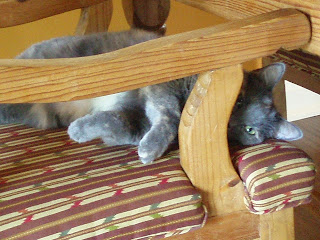