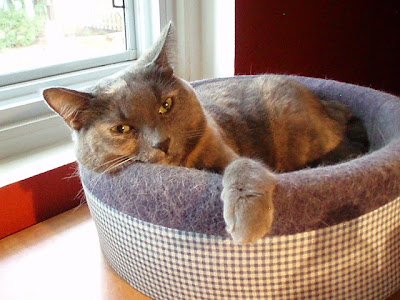 Pica is doing great! She has settled right in, is way more relaxed and calm than she has been since arriving, hardly ever becomes nervous with affection anymore, and has allowed her true personality to shine through which is quite comical.

She's co-existing with the boys just fine but every now and again one of them will be walking by in too close proximity to her and she'll reach out to give their face a flurry of swats and a hiss - I think it's just her diva way of telling them not to forget she's Queen (like they could anyway). She also loves to spook herself, chasing shadows on the walls and other imaginary things that make her puff up like a cotton ball - it's hilarious to watch and she seems to be thoroughly enjoying herself in the moment.

No further adoptions calls have come but we've been in this long enough to know that when it's meant to happen, it will.

Happy Friday everyone.
Posted by Safe Haven Hotel at 3:27 AM